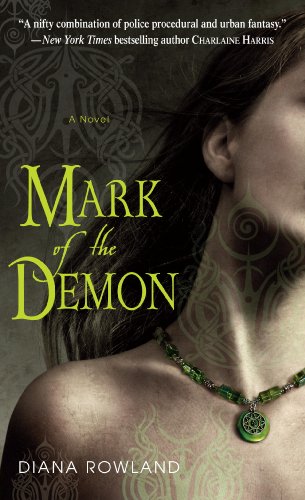 Blood of the Demon by Diana Rowland

BETWEEN HEAVEN AND HELL, MAN AND DEMON, SHE’S ABOUT TO FACE THE ONE THING SHE MAY NOT BE ABLE TO SURVIVE. Welcome to the world of Kara Gillian, a cop with a gift. Not only does she have the power of “othersight” to see what most people can’t even imagine, but she’s become the exclusive summoner of a demon lord. Or maybe it’s the other way around. The fact is, with two troublesome cases on her docket and a handsome FBI agent under her skin, Kara needs the help of sexy, insatiable Lord Rhyzkahl more than he needs her. Because these two victims, linked by suspicious coincidence, haven’t just been murdered. Something has eaten their souls.It’s a case with roots in the arcane, but whose evil has flowered among the rich, powerful, and corrupt in Beaulac, Louisiana. And as the killings continue, Kara soon realizes how much there’s still to learn about demons, men, and things that kill in the night—and how little time she has to learn it. From the Paperback edition.

We’ve met our cast in Mark of the Demon: Kara Gillian, detective; Ryan Kristoff, agent of the Federal Bureau of Investigations; and let’s not forget Rhyzkahl, Demonic Lord. This time around, Gillian isn’t investigating a serial killer, she’s looking into a series of murders that seem worthy of LA or NYC – corruption and adultry make it a little difficult to narrow in on a suspect. Meanwhile, she is trying to figure out how to get her aunt back, and Rhyzkhal is still visiting her in her dreams. Ryan remains confusing (friend or more than?), but this time he’s not alone, bringing along Zack Garner, surfer dude slash federal agent with a bit of other-planar sensitivity. Zack is mostly the “don’t be mad at Ryan” guy when Kara is on the outs with her task force BFF, but he does also pipe up to confirm Kara’s funny feelings. He’s an enjoyable addition, but ultimately very second-string. We also get to know the morgue assistant a bit better, and Rowland’s experience in that particular dirty job makes one more character shine when he could have otherwise blended into the background. (Did I mention yet how much I love that Rowland knows what’s she’s talking about?)

Kara’s death in the demon plane has brought her back to the human plane with enhanced abilities; and Rhyzkahl likes the new Kara even more than he liked the old Kara and asks her to be his summoner – a decision she struggles with, because she does not have her aunt Tessa to validate or deny her musings on the subject. While she tries to make the decision on her own, she needs access to Tessa’s library, and getting access parallels an increase in crimes related to her original murders, which are increasingly grisly. What Rowland calls “essence” (can be most easily equated to a soul) has been removed from the dead bodies, leaning Kara towards someone with a supernatural ability similar to her own. However, as the murders continue, the essence is not removed post-mortem, but instead is the cause of death. Hopscotching her new Captain and Chief of Police’s suspicions, Kara also becomes wary of Ryan, who is quite vocal in his disgust of Rhyzkahl’s offer. In his defense (or maybe it’s extremely well-placed), Rhyzkhal does not answer to Ryan’s claims until the last minute – causing Kara to reevaluate her relationship with Ryan.

As a follow-up to Mark of the Demon, I have to give this one all the stars, because it can stand-alone or it can bring a reader further into Rowland’s world of crime and the supernatural. The ability of the author to neatly wrap up her murder and subplot (as initially introduced) comes into play again, but this time we are in no doubt there must be a follow-up. Rhyzkhal & another demon’s proclaimation that Ryan is an “oathbreaker” is the thread that I hope shall be explored in the next volume. The honor code of the demons is reiterated many times in both this novel and its predecessor, therefore the idea of an “oathbreaker” is even more unsettling than merely someone who didn’t keep a promise. It is perhaps this betrayal by Ryan (who, previously, has always acted as though he knew next to nothing about the demon world, but has been showing an increase in supernatural ability that he has clearly been hiding) that tips Kara towards accepting Rhyzkahl’s offer. His crossing into the human plane has the potential for disaster (unlike her twelfth level demon, who merely enjoyed popcorn and a ride in a U-Haul, a demonic Lord is a bit more serious), and I look forward to what issues that could cause with Kara, even though he’s agreed and bound himself by his word, to not break any of the laws of the human realm.

I find myself enjoying some of the supernatural elements more this time around than the crime element – which, previously, was about 50/50. This time we get more of Rhyzkhal, and I don’t think I’m too far off the mark if I insinuate or outright state that as far as old Fabios with ulterior motives go, Rhyzkhal could have an interesting meet-and-greet with Eric Northman of Charlaine Harris’s Southern Vampire Mysteries. Like the Sookie books, Rowland’s protagonist is the only point of view we get, and at best, Rhyzkhal is mysterious and clearly amused by something as much as he’s infuriated. Rowland makes no secret of how dangerous Rhyzkhal is, which lines up with how Harris tries to point out, time and time again, how dangerous Eric Northman is. But at the same time, there is something alluring about these characters. How many secrets they’re keeping is possibly uncountable, but when asked direct questions, they always answer truthfully, so one can say they never lie. Which, in the face of Ryan’s subterfuge, suddenly makes Rhyzkhal a much more realistic player for Kara’s affections than before, when he was merely a good dream and Ryan was sleeping in her house.

Continually linking the supernatural with murders in a town that, by Kara’s own admission, doesn’t get a whole lot of until now, could present a problem in future books: a sudden increase in crime isn’t entirely believeable in an environment such as Beaulac, Louisiana. However, I’m willing to stay on this ride and get my crime fix alongside my urban fantasy one in further Kara Gillian volumes. Rowland has the ability to branch out into straight-up crime fiction, and I hope that when she’s done with Kara and Ryan, Rhyzkahl and Beaulac, she continues to grace the shelves of my local bookstores. Until then, though, give me more!