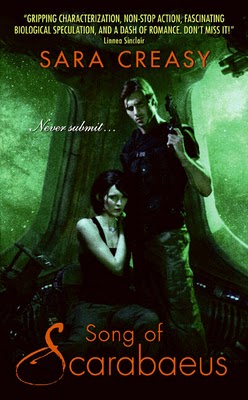 Song of Scarabaeus by Sara Creasy

Trained since childhood in advanced biocyph seed technology by the all-powerful Crib empire, Edie's mission is to terraform alien worlds while her masters bleed the outlawed Fringe populations dry. When renegade mercenaries kidnap Edie, she's not entirely sure it's a bad thing . . . until they leash her to a bodyguard, Finn—a former freedom fighter-turned-slave, beaten down but never broken. If Edie strays from Finn's side, he dies. If she doesn't cooperate, the pirates will kill them both.

But Edie's abilities far surpass anything her enemies imagine. And now, with Finn as her only ally as the merciless Crib closes in, she'll have to prove it or die on the site of her only failure . . . a world called Scarabaeus.

Sara Creasy’s debut novel is gripping, blending exciting action with emotional involvement in a way that kept me hanging on every page. Creasy wastes no time jumping right into the action, and in the tightly-plotted story, there are no boring sections. She balances the exciting parts with well-placed breaks, but the story moves along at a good pace and never left me wishing it would hurry up and get to the good parts.

As I’ve been reading lately, I’ve started paying attention to the twists and turns that authors use to make their characters’ lives more difficult. Sometimes I find myself expecting things to go smoothly for the poor characters, and what I consider to be a really good book will constantly upend my expectations, tossing monkey wrenches into the works right when I least expect it. Song of Scarabaeus has its fair share of monkey wrenches, always tossed in at the best possible moment: right when I think things are finally going to work out for Edie Sha’nim, the cypherteck protagonist.

The story and the science—focusing on terraforming and biotechnology that has a cyberpunk feel—are solid and entertaining, and they both serve as a strong foundation for the well-written characters. Edie has been in the service of the Crib, a totalitarian authority that terraforms planets for human colonization, ever since she was a child. She isn’t particularly happy about being what amounts to a slave to the Crib, but then again she also wasn’t happy on her home planet of Talus, where her half-breed status made her an outcast. When she’s “kidnapped” by a group of pirates who want to loosen the Crib’s grip on the Fringe planets, she’s left in a rather ambiguous situation. Does she stay with the Crib and continue to do work that makes her morally uncomfortable, or does she go along with the Fringers and take the opportunity to subvert the Crib’s authority?

One thing I love about Song of Scarabaeus is its moral complexity. There really isn’t a clear line between good and bad. Most readers would assume that they should identify with the people who are fighting for freedom against a restrictive regime, but Creasy constantly keeps you on your toes by tossing amoral and downright unpleasant characters into the “good guys” and making a few of the “bad guys” sympathetic.

Edie is constantly torn between her own idea of what is right and what the possibly-corrupt captain of the Fringers wants from her. Tossed into that moral dilemma is Finn, a former slave who was “freed” when he helped kidnap Edie only to find himself bound to her with a leash that will kill him if he strays too far from her side. As they navigate their way through the shifting loyalties of the supporting characters and their dangerous mission on the failed planet of Scarabaeus, Edie and Finn grow closer and learn to trust each other. There’s just a touch of romance in Song of Scarabaeus, but it’s a wonderful touch.

The book’s ending is obviously a set up for the next book in the series—I haven’t seen anything about a sequel’s publish date, but this one ends in such a way that resolves just enough to keep you from throwing the book across the room, but leaves so much open that you just know there’s going to be more. I’ll be keeping my eyes peeled for any news about a sequel. I’m dying to know what’s going to happen to Edie and Finn next.

This review was previously published at SFRevu in August 2010.

A Wrinkle In Time: 50th Anniversary!