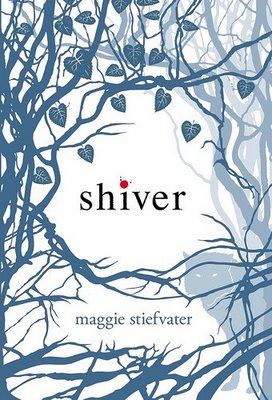 Grace is fascinated by the wolves in the woods behind her house; one yellow-eyed wolf in particular. Every winter, she watches him, but every summer, he disappears. Sam leads two lives. In winter, he stays in the frozen woods, with the protection of the pack. In summer, he has a few precious months to be human . . . until the cold makes him shift back again. When Grace and Sam finally meet, they realize they can't bear to be apart. But as winter nears, Sam must fight to stay human - or risk losing himself, and Grace, for ever.

I’m a sucker for a good opening. Shiver begins like this: “I remember lying in the snow, a small red spot of warm going cold, surrounded by wolves.”

That’s this fangirl sold. And before I even get into the plot, the book itself is alluringly pretty – the blue-grey of the cover is reflected on the pages as well – the ink is a shade of blue. But let’s get to the story, shall we?

When Grace is a young child, she is lost in the woods and, nearly frozen, attacked by wolves. She has a foggy memory of that day, and of one wolf that scared the others away until she was found. She thinks of this wolf as “her” wolf, and often sees it in the wintertime, just at the edge of the woods near her home. She is a teenager when she discovers that her wolf is only a wolf in the wintertime – when the weather warms, he is a young man named Sam who desperately does not want her to get caught up in his life…especially when he is running out of time.

Turns out, once you go wolf, you are a ticking clock – counting down to the day when you can’t change back. It’s an interesting take on it, the wolfism closely linked to body temperature, and it is by turning Sam into Nanuk of the North with layers of fuzzy sweaters and a space heater that Grace tries to buy time to save him.

Because she was in love with Sam (in the way that little girls latch onto things that they consider their own special secrets which become something more as they get older) before she knew what it was called, her quick acclimation to Sam’s dual nature is perfectly believable. After all, you’re a teenage girl and this wolf that you think watches over you turns out to be a hot guy a couple of years older than you who is in love with you? This is that (to pull in other supes) vampire thing about loving you for eternity that is so alluring – it’s already there, you just have to jump into the crazy. And Grace, well, Grace jumps in with both feet. But I like wiry, bed-haired musicians too, so I don’t exactly blame her.

This book is a race against time – it seems that just as they find each other, they’re already out of it, which means the book moves fast. Grace’s absent parents (which Stiefvater writes on at length in her blog – I won’t lie, I found this blog post first and it made me pick up this book, first time I ever touched fingers to any of her pages) mean that she is unquestioned as to her motives and keeping her friends out of the loop (I mean, who would believe her?) means that she justifies so much to herself with such good reasoning without being questioned that frankly, I didn’t question her either.

While at its core, it is a love story, I found the fact that they weren’t falling in love (which I always thought was the most interesting part) but rather trying to figure out how to be in love when in each other’s company rather refreshing. The pacing is alternately slow and quick, as the situation demands, and while it is predictable in a lot of ways, I loved reading it. Grace is a competent narrator, going through all the frenzied motions of someone trying to save the life of someone they love at the risk of being “always together, eternally apart” (thanks Ladyhawke) if he is lost to his wolf side for good. Plus, I think sometimes were it not for Anne Rice in my early years, I would love werewolves more. So my later years are making up for it by giving me really great wolfie books. Stiefvater gives you little tidbits of other wolves, why some cling to their humanity and others to their wolfie natures, and paints a very different picture than I’ve generally seen – there is no Big Boss (like the king and queen of Donna Boyd’s The Passion & The Promise or Bran of Patricia Briggs’s Mercy Thompson series), only a group of people who happen to all be werewolves and have no particular ties except their similar situation.

While the story of Sam and Grace mostly ends here, I do look forward to getting my hands on Linger…which is printed in GREEN. Goody.

Review: Being Human (US) – “The Ties That Blind”

Review: Being Human (US) – “Mama Said There’d Be Decades Like This”

Review: Being Human (US) – “Addicted To Love”

Review: Being Human (US) – “(I Loathe You) For Sentimental Reasons”