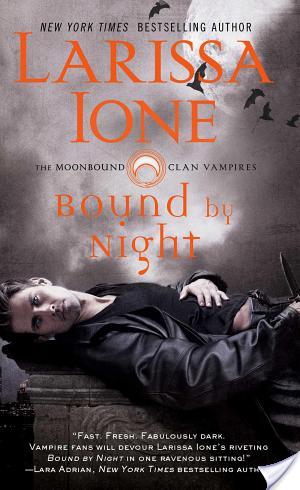 Bound by Night by Larissa Ione

The first installment in a sexy new paranormal romance series by Larissa Ione, author of the bestselling Demonica series!Nicole Martin was only eight years old when she narrowly survived a massacre: her family’s vampire slaves rebelled and killed everyone in her household. Twenty years later, Nicole now dedicates herself to finding a vaccine against vampirism…and eradicating the gruesome memories that give her nightmares. Riker, a member of the wild vampire Moon Clan, is haunted by his own demons—his wife Lorraine had been captured and enslaved by the Martin family. It was during a botched escape attempt that she was killed, along with their unborn child. Still wracked with grief and anger, Riker is now fueled solely by the desire to rescue vampire slaves…and slaughter their owners. When Riker stumbles upon Nicole in a chance meeting, he immediately recognizes her as a member of the Martin family that once enslaved his wife—and she recognizes him as the wild vampire she saw kissing a pregnant slave in the moments before her violent death—an image that has haunted her dreams for years. When Riker kidnaps Nicole and they spend a night together in a cave on the way back to his clan, suddenly they begin to realize that they aren’t as different from one another as they may have thought—and they’re finding themselves drawn to one another…

This book contains potentially triggering material. You can find details of potential triggers at the end of this review.

I’ve been burnt out on vampire romances for a while now. I mean, I still like the idea of sexy vampires, but I haven’t come across anything new that’s really thrilled me or caught my attention. And I’m sorry to report, this new series by Larissa Ione really didn’t blow my skirt up with new, amazing vampire stories. It’s a fairly entertaining read with some very sexy scenes, but overall? Meh.

The vampire lore in this world reads more like werewolf lore to me, with a heavy emphasis on rather generic Native American myths. The clan leader is Cherokee, and they live outside Seattle, but there are tipis and myths about crows and ravens, and it all just seemed very mishmashed and not really researched out to me. It’s definitely different from most of the vampire stuff I’ve read, but at the same time, other than the need to drink blood, the vampires basically act like regular humans who eat food, drink booze, go out in the daytime, and even have babies. They just didn’t feel like vampires to me.

A lot of the male characters in this book suffer from Alpha Male Asshole Syndrome. They swagger and saunter and punch walls and refer to each other as “dude.”. Riker, the hero of this book, isn’t quite as overbearingly dudebro vampire, nor is Hunter, the pack’s leader, but a lot of the side characters (who I presume will be leads in later books) just irritated the crap out of me.

And on a related note, the hero’s name is Riker. I have to admit, for the first quarter of the book, every time his name was mentioned I pictured this guy:

and promptly lost my ladyboner.

Most of the conflict surrounding the romance stems from prejudices and a refusal (mostly on Riker’s part) to acknowledge that long-held assumptions are wrong. Nicole, the heroine, runs a company that enslaves and exploits vampires, and when she was a child, she was viciously attacked by one during a small uprising at her family home. She has every reason to fear and even hate vampires, though she finds the science behind them fascinating. Riker hates Nicole’s family for killing his former mate and for all the other inhumane stuff their company has done. But they feel Inexplicable Attraction™, which paves the way for a very slow, very fraught journey to falling in love.

Nicole seems to catch on quickly that her ingrained prejudices were wrong, but Riker keeps falling back on them even as their romance progresses. I found some of the conflict introduced late in the book to be kinda contrived and rather frustrating because both characters were being stubborn and stupid for what seemed like the sole purpose of dragging out the romantic tension for another twenty pages or so.

The sexy scenes were very good, though; Larissa Ione knows how to write some scorching sex. And I did like some of the supporting characters quite a bit, including a minor character who will be the heroine of the next book in the series.

Be forewarned, though: there are mention and threats of rape as well as View Spoiler »sexual slavery and mentions of rape for the purpose of impregnating female vampires « Hide Spoiler.

By the end, I enjoyed the book more than I thought I would at first, but I’m really not super keen on this one. I will give the second book in the series a shot because the two leads in it were pretty interesting characters in this one, but this definitely isn’t the book to break me out of my paranormal romance reading rut.