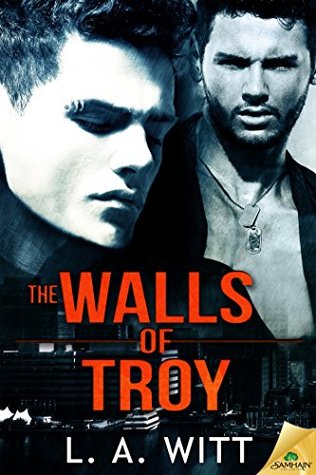 The Walls of Troy by L.A. Witt

Just when the pieces begin to add up, danger blows them all apart…

It isn’t long before Iskander realizes there’s more to his assignment than protecting the kid from benign harassment by homophobic classmates. Behind those piercings, eyeliner, and bad attitude, Troy Dalton is scared. Truly, deeply, scared.

Troy is indeed hiding something. Iskander is the only one who’s ever taken his fears seriously, which gives him hope. Yet Troy isn’t sure one lone, armed-to-the-teeth bodyguard is enough to keep him safe, especially since he can’t risk telling Iskander the truth.

As Iskander slowly gains Troy’s trust, the walls start coming down. And before they know it, the warmth between them explodes into real heat. Until suddenly Iskander realizes he’s a magnet for danger, not a shield.

Now he doesn’t know how to keep Troy safe—stay close, or get as far away from him as possible.

Warning: Contains a younger man with a thing for older men, and an older man who doesn’t usually have quite so much trouble resisting younger men. Author is not responsible for any bad academic habits that might result from watching these two “study” for their exams.

For my second venture into reading books by L.A. Witt, The Walls of Troy wasn’t bad. I typically don’t like to read a lot of books that feature characters who are in the military, or any kind of law enforcement, but I was intrigued by the bodyguard aspect of the plot and, not gonna lie, the hot guys on the cover really sold it for me.

This book is told in first person, from the point of view of MA1 Iskander Ayhan (and I’ve honestly forgotten what the MA1 means) who is recruited to be the bodyguard of Admiral Dalton’s son, Troy. Troy is supposedly having trouble in college with homophobic bullies, but it turns out Troy has a thing for military men and his latest ex has been stalking and threatening him, and also his father’s job. That’s really the main plot of the story, everything else is just Iskander’s attraction to Troy and their budding relationship.

I found this book to be a very quick read and I’m not just talking about the ease with which the story is told. It all flowed very well and it was not hard for me to want to sit down for however long it took to finish the book. The romance itself escalated quickly. There was sort of an insta-attraction thing for Iskander when he first meets Troy, which is fine. Lust at first sight is great and it creates some fabulous sexual tension; I have no problem with both of them wanting to fuck each other within a few days of knowing each other. The problem I have is how quickly they fell in love with each other. I’m not entirely sure how many days they were in each other’s company, but it was at least a week, maybe two, and then they’re confessing their love for each other. The quick pace of everything made the story feel like a one-shot fanfic where there’s not a lot of depth beyond the two main characters having a lot of sex, with an underlying stalker plot that doesn’t really feel like it has much presence as anything other than the thing that keeps the two characters together. I think this book could have had more to it than it did, and certain parts just felt shallow.

I think that steamy sex scene-wise, this book gets an A+ though, because damn. L.A.Witt can write some pretty hot sex scenes. The sex scenes and the moments between Iskander and Troy that lead up to the sex are what make this book for me. Without those scenes this book would be nothing. For that alone, I plan to read more of her work and it’s why I gave this particular book a 3.5 star rating instead of something lower.