Thanks to Pamela, I marathonedÂ Grantchester s1 (and nearly made myself late for work this morning). Fans of British detective shows who haven’t watched this one yet should definitely check it out. Though it isn’t as gritty, hard-hitting asÂ Luther, The Fall, orÂ Broadchurch, it covers plenty of issues on top of featuring an alarming number of murders in such a small town. Sidney and other characters deal with post-WWII trauma, the woman he loves can’t marry him because of his social status, his sister is in an interracial relationship, there are secret gay liaisons as well as extra-extra-marital affairs and buckets of very modern plotlines in the often romanticized 1950s setting.

So let’s start with the pretty, shall we? 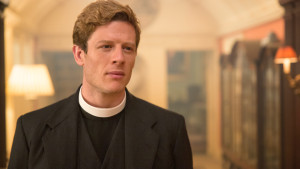 This is Sidney. He’s a vicar and very pretty. He also enjoys jazz. 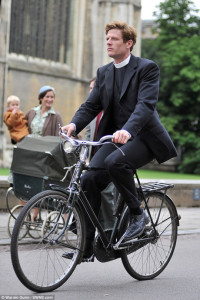 He rides a bicycle everywhere.

And he has a puppy named Dickens. 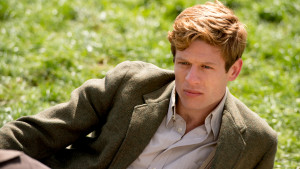 He looks even better out of his clerical getup.

And completely out of it as well.

Dragon Age: Inquisition fans may recognize James Norton as the voice of Cole.

Grantchester is available on Amazon Prime. You can purchase a copy via Amazon or see if your local library owns a copy. PBS Masterpiece Mystery will air s2 starting March 27th, check your local listings.

All images courtesy of PBS and ITV.