February 23 marks the feast day of The Immortal Dana Scully, Our Lady of Skepticism and Saving Mulderâ€™s Ass Every Time. We love her and her encyclopedic knowledge of medical science – and of course, her ability to run in heels. She is the reason many of us went into the STEM field, knew we were queer, and dyed (and continue to dye) our hair red. Dana Scully made it through years of sexist bullshit, abductions, and whatever else Chris Carter decided to throw at her. To celebrate, why not watch some of the best Scully-centric episodes The X-Files has to offer?

1×13 – â€œBeyond the Seaâ€
This is the first truly Scully-focused episode in the series and it really gave Gillian something to chew on as an actress. Following her fatherâ€™s sudden death, Scully goes with Mulder to North Carolina to stop a serial killer. Incarcerated murderer, Luther Lee Boggs (Brad Dourif) claims to have knowledge of the case from his psychic visions and speaks to Scully as her late father. Mulder is skeptical, but Scully is the one who starts seeing connections between Boggsâ€™ statements and the case. In the end, one of his warnings saves Scullyâ€™s life as she is in pursuit of the killer.

2×08 – â€œOne Breathâ€
For one that doesnâ€™t have a lot of Scully in it (as Gillian had given birth recently), itâ€™s still one of the most emotional Scully episodes. After her kidnapping, Scully turns up at an emergency room in a coma with little chance of survival. We see into her mind as Mulder tries to figure out how she got there and how to bring her back. She receives a visit from her father that still makes me cry like a baby every time I watch the episode. Mulder meets Melissa Scully (Melinda McGraw) who is into crystals and energy – very much the opposite of her hard science baby sis. By some mysterious (or perhaps miraculous) intervention, Scully recovers from the coma and Mulder returns the gold cross that he had been keeping during her absence.

2×13 – â€œIrresistibleâ€
Possibly the creepiest episode of them all (and featured on myÂ creepiest episodes list). Dead bodies are being dug up and mutilated in St. Paul. The local detective calls in Mulder and Scully, believing it to be the work of aliens. What they discover is a lot more real and more disturbing than little green men – an otherwise unassuming ex-mortician, Donnie Pfaster (Nick Chinlund) who is working his way up from dead bodies to live ones. While dealing with this case, Scully is also working on her PTSD from the kidnapping. So guess who gets to be his next target? Of course itâ€™s Scully! What I love about the episode is how you see Scully trying to hard to push herself into being â€œokayâ€ again. You get to see her be vulnerable and how that fights against her professional nature, and ultimately crumbles when they take Pfaster into custody.

4×13 – â€œNever Againâ€
Iâ€™ll be honest: I used to hate this episode as a kid. I didnâ€™t like that Scully was into someone who wasnâ€™t Mulder. As an adult, I can appreciate it a little better and still keep my ship afloat. Scully goes on a solo investigation to Philadelphia to follow up with a Russian informant about a secret UFO research center. In doing so, she crosses paths with recently divorced, Ed Jerse (Rodney Rowland). What she doesnâ€™t know is that his new Bettie Page-style tattoo has been speaking to him and encouraging him 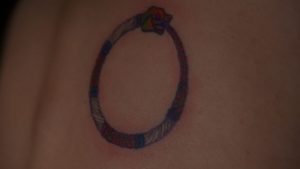 to act out violently. By the way, the tattoo is voiced by Jodie Foster. Scullyâ€™s rebellious streak comes out in this episode, presumably triggered by the discovery that she may have cancer (4×12 â€œLeonard Bettsâ€). However, this episode was meant to follow â€œLeonard Bettsâ€ but was shifted around due to the Superbowl airing that year. Personally, I think that if it had aired as intended, Scullyâ€™s actions wouldnâ€™t make as much sense. We have seen her drop her cool, professional demeanor and we know that she has a history of defying authority, but I just canâ€™t see it rearing its head without some significant emotional event. In the end, Scully gets an ouroboros tattoo, realizes that the dye used in Jerseâ€™s tattoo contains a dye that caused his psychosis, and reminds Mulder that not everything is about him.

4×14 – â€œMemento Moriâ€
Thus begins the Cancer Arc in the series. Scully learns that she has an inoperable tumor located in her nasal cavity, but is determined to keep working until she is physically unable to. She and Mulder travel to Allentown, PA to meet with an abductee only to find that she has passed away. They find another member of her MUFON chapter who tells them that all of the members except one have died of cancer, and he believes that the government is behind their abductions and subsequent illnesses. While Mulder tracks down more information that could connect this conspiracy to Scullyâ€™s cancer, she opts to begin chemotherapy. The episode ends with Scully determined to fight her cancer (as well as a hug, which had been filmed as a kiss that they cut *shakes fist angrily*).

5×06 & 5×07 – â€œChristmas Carolâ€ & â€œEmilyâ€
Just going to count this two parter as one entry. While visiting her family for the holidays, Scully receives a call for help from a woman who sounds like Melissa (who has since died). This leads her to a young girl, Emily Sim (Lauren Diewold), who she believes may be her sisterâ€™s biological child, but who is actually hers. Emily had been part of an experimental group that has ties to Scullyâ€™s abduction. Mulder believes the child to be an alien-human hybrid after exhibiting signs similar to the clones introduced earlier in the series. Scullyâ€™s adoption request is turned down, and sadly, Emily succumbs to a mysterious illness by the end of the second episode. Bring tissues.

5×10 – â€œChingaâ€ (AKA â€œBunghoneyâ€)
Stephen King presents Dana Scullyâ€™s Vacation. While taking some much needed time off in Maine, Scully comes across a violent scene inside a local grocery store. She soon unofficially joins local police chief, Jack Bonsaint (Larry Musser) in the investigation and discovers a connection between a single mother, Melissa Turner (Susannah Hoffman), her daughter Polly (Jenny-Lynn Hutcheson), and her daughterâ€™s creepy porcelain doll. Itâ€™s one of the rare episodes where you get to see off duty Scully, at least when she isnâ€™t drawn back into the increasingly weird and gruesome case. Even though the title is meant to be the name of Pollyâ€™s doll, no one ever calls it that, and itâ€™s also can be a colloquial Spanish swear word. Some subsequent airings feature the alternate title, which I think sounds worse than any of the translations Iâ€™ve found.

5×12 – â€œBad Bloodâ€
After Mulder kills who he believes is a vampire, the agents are called in to explain to AD Skinner just what the hell happened. Mulder wants to get their stories straight and so Scully begins by recounting the series of events that lead up to his â€œoverreaction.â€ They travel to a small town in Texas where some cows and tourists have been exsanguinated and meet the local sheriff (Luke Wilson). While Mulder and the sheriff do some investigating, Scully is left to do autopsies on the dead tourists. She discovers a connection between the pizza delivery guy and the victims, and arrives just in time to find Mulder about to be the next victim. In her version of things, Mulder is stubborn and kind of a jerk to her, whereas in his version, sheâ€™s the one being contrary and rolling her eyes at his ideas. This one is hilarious largely in part because Gillian gets to be funny, which doesnâ€™t happen very often in the series. I always recommend this one to people, even if theyâ€™ve never seen the show.

7×17 – â€œall thingsâ€
Written and directed by Gillian, the episode begins with Scully dressing in a bathroom while the camera reveals a sleeping Mulder in the connecting bedroom. In a flashback, we see Scully crossing paths with a former professor, Daniel Waterston (Nicolas Surovy) with whom she had an affair during medical school. Waterston is in the hospital suffering from an undiagnosed heart condition. Mulder asks her to meet with a contact, Colleen Azar (Colleen Flynn) to obtain some information for his investigation of crop circles in England. Azar introduces Scully to some Buddhist concepts, of which Scully is initially dismissive of, but then comes back around to them. This helps Scully to figure out the cause behind Waterstonâ€™s disease, and helps him make a recovery, although she turns down his offer to rekindle their relationship. This episode isnâ€™t a typical one, but it demonstrates Scullyâ€™s personal growth from a young woman to the woman she became as well as her shift from hard skeptic to being more open-minded.

A few honorable mentions for episodes that may not have been Scully-centric, but included some great Scully scenes:

3×13 – “Syzygy”
Scully muttering to herself angrily whilst smoking and pacing in her hotel room is one of my favorite things about that episode. And of course: “Shut up, Mulder.”

4×09 – â€œTermaâ€
Scully telling the government off is always tops in my book.

6×03 – â€œTriangleâ€
Between modern day!Scully hell-bent on finding Mulder after he goes missing in the Bermuda Triangle and 1939!Scully threatening to punch nazis (and actually punching Mulder for kissing her), this episode is a great one. Did I mention they kiss?

What are some of your favorite Scully episodes or scenes that we may have missed? Share with us in the comments below.

You can watch The X-Files on Netflix, Hulu, iTunes, and Amazon Video. For the completionists who want to own a DVD or Blu-ray copy, you can also buy the series on Amazon.