There are many, many, many women you should know about and celebrate, but we thought we’d take a moment to talk about our favorite fictional women. Good representation on TV and in movies (as well as books, comics, and video games) is an incredibly important part of helping level the playing field for people of all genders. We’ve picked out some of our favorite women to praise today, and while there’s always something problematic in how women are portrayed in Hollywood, we think these are some pretty great fictional role models.

Leia Organa (Star Wars)
The undisputed queen of our hearts. She’s willing to go to extraordinary lengths to do what’s right, and despite losing basically everything, she didn’t let her own personal grief get in the way of fighting the Empire. Long live the Huttslayer!

Dana Scully (The X-Files)
Our Lady of Skepticism, She Who Refuses to Put Up With Mulderâ€™s Bullshit, She Who Stands By Mulder Even When Heâ€™s Full of Shit. Scully is smart, savvy, and one of the best characters to come out of TV in decades. We love her so much that we even made a guide of our favorite Scully-centric episodes.

Ellen Ripley (The Alien Quadrilogy)
Ripley isnâ€™t known as Our Lady of Survival for nothing. In Alien alone, she manages to stay alive while a creature destroys her entire crew – and saves Jonesy, the shipâ€™s cat. Decades into the future, she wakes to do it all over again, only this time against a legion of xenomorphs and one very pissed off Queen.

Sophia Burset (Orange is the New Black)
Hands-down our favorite lady at Litchfield. She gets a lot of shit thrown her way, but sheâ€™s still a kind person who sticks to her guns. Itâ€™s also very rare that we see a trans actress playing a trans woman in the media.

Rey (Star Wars)
Reyâ€™s a new addition to our list of favorite fictional gals, but we have a feeling sheâ€™s going to be on it for a very long time. Reyâ€™s a loner whoâ€™s learning to open up, someone whoâ€™s never had a friend but suddenly finds herself in the midst of the Resistance, needing to trust the people around her. We canâ€™t wait to see how she grows as a character.

Mako Mori (Pacific Rim)
Ridiculously smart and capable, Mako is everything we love in a female character. She pilots a giant robot, punches giant alien monsters in the face with the aforementioned giant robot, has nothing but respect and love for her father figure, and manages to not collapse in a heap on the floor upon seeing Charlie Hunnam shirtless.

Natasha Romanoff (Marvel)
Who can manage to crack jokes even when the world is falling apart around her? Whoâ€™s willing to fight alongside people with crazy superpowers and technology with nothing but her wits, her pistols, and her ingenuity? Who is absolutely not a monster, no matter what was done to her? This gal.

Kamala Khan (Marvel)
Though weâ€™re both horribly behind on the Ms. Marvel series, we still love Kamala. Sheâ€™s a fangirl after our own hearts and, when she finds herself with powers, decides that she wants to use them to help people. As she says, â€œgood is not a thing you are. It’s a thing you do.â€

Evie Carnahan (The Mummy)
We love librarians, and that goes double for Evie. Smart and tired of not being taken seriously, she tromps out into the Egyptian desert and saves the world (okay she had some help from Rick, but she was busy!). Always trust the girl who reads.

Patty Tolan (Ghostbusters)
Queen of New York City History. Patty brings her knowledge to the Ghostbusters and uses it to help save the city she loves. Also, if talking about books and listening to Stevie Nicks is her idea of a book club, then sign us up. That sounds like the best night ever.

Dr. Jillian Holtzmann (Ghostbusters)
Okay, we definitely have a crush on her but also think sheâ€™s awesome. She can create all kinds of weapons and devices to get the job done. There may be a few explosions (okay, a lot of explosions) along the way, but whatâ€™s some fire damage in the name of science? 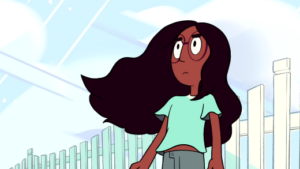 Connie Maheswaran (Steven Universe)
Curious and intelligent, young Connie is an introvert who isnâ€™t always able to make long term friendships until she meets Steven. She grows through the series and becomes more confident and even starts fighting alongside Steven and the Gems. With her broad knowledge and combat skills, Connie is someone you want on your team.

Peggy Carter (Marvel)
â€œI know my value. Anyone else’s opinion doesn’t really matter.â€ We will forever mourn the end of Agent Carter and hope that Marvel will pull its head out of its butt and give us more Peggy. From her red lipstick to that iconic hat to the way she smacked that guy in the face with a stapler (to the way she respected Steve from the beginning, sob), we love Peggy.

Jess Bhamra (Bend It Like Beckham)
If anyone could get us interested in sports, itâ€™s Jess and her love of soccer (sorry, we know itâ€™s â€œfootballâ€ literally everywhere else but the U.S.). She knows what she wants in life and uses her natural athleticism to help make her own path. Over the course of the film, she learns from her mistakes and finds a balance between honoring her culture and following her dreams.

Tell us who your favorite fictional women are in the comments!