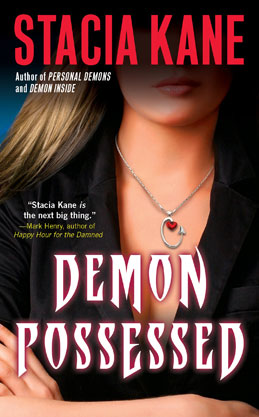 When one of Dr. Megan Chase’s patients is convinced his problems stem from demonic possession by a “minister,” Megan can’t do anything about it without revealing the truth about her psychic abilities. Still, she’s determined to stop the less-than-holy man. Since the minister is holding a “Weekend Exorcism” next door, Megan figures she can kill two birds with one stone—but it may be Megan who is in danger of being killed. Someone’s planning on killing her and using the meeting to deflect blame. Meanwhile, Megan’s lover Greyson has become vulnerable to assassination, and what was supposed to be a relaxing, romantic weekend turns into a life or death, love or loss situation.

In Personal Demon, psychotherapist Megan Chase is alarmed when she starts seeing ugly little demons on everyone’s shoulders.  Her alarm only grows when she meets shady lawyer Greyson Dante, who tells her that everyone in the world has a personal demon—except her.  Alarm turns to fear when something even worse tries to kill her; the tribulations she faces trying to stay alive are more than nicely balanced out by her growing romance with Dante, who’s a demon of a different sort himself.  A stint of mental illness in her past and a murder accusation she’s tried a long time to forget may prove the key to unraveling the mystery.  Only by accepting the ugly little demons she’s been seeing as her “family” can she save her life.  Her eventual triumph over the Accuser, the thing that’s been trying to kill her, provides a lovely introduction to the world of demon politics.

In Demon Inside, Megan has to deal with the near-simultaneous loss of her partnership with the death of her father.  At the same time, someone—or something—is killing her demons as well as demons in the other demon ‘families’, and she has to find out why before she has none left.  Going home for her father’s funeral opens up emotional wounds that have never properly healed; her mother and brother are decidedly unhappy to see her, and even more so when they learn that Megan’s father left her the asylum where she was confined as a teenager.  With Dante, witch friend Tera, and psychic friend Brian, she tries to figure out just who or what is behind the demon deaths, and not get killed while doing so.

Demon Possessed is the third book in Kane’s Megan Chase series.  The series is sufficiently complex, with enough minor characters, that I wouldn’t recommend reading the third book without having tackled the other two first.  However, when a series is this good, that’s hardly a burden.

The story opens with an F.B.I. agent visiting Megan, who is more than a little nervous.  She realizes her anxiety is only appropriate when the agent starts asking questions about Dante, her demon lover.  Although she refuses to answer any of the questions, the agent lets Megan know she will see her again.

As soon as the agent leaves, Megan’s next patient arrives, only to let her know he’s no quitting therapy.  Megan’s day goes downhill from there.

Stacia Kane’s writing is excellent; realistic, complex characterization, gripping action sequences, and some of the hottest sex scenes I’ve ever read.  She knows how to maintain reader interest through the course of a novel, and is good at developing plot threads to carry from one book to the next.  Even the minor characters are distinct individuals:  for example, the three Cockney bodyguard demons—Malleus, Maleficarum, and Spud—that Dante assigns to keep Megan safe, are all distinctive, with their own quirks.  (And I’m not ashamed to admit I almost love them more than the main characters; I’m about ready to start a fan club for the three brothers!)

If I had any quibble with anything in the book, it would only be a minor one.  Megan spent so much time in this novel feeling queasy and throwing up that I had myself convinced that she was pregnant, despite the fact that demons and humans can’t have children together.  It did start to grate a little after awhile, much like Bella Swan’s non-stop klutziness in the Twilight novels, but by the end of the book, my irritation with the flaw had faded into the background, thoroughly overwhelmed by the sheer amount of awesome that was the story’s finale.

Demon Possessed, like the other two books in the series, is compulsively readable; I breezed through its 321 pages in just under three hours, and read the prior two books just as quickly.  Megan’s ongoing story is one that stands out from a great deal of the other urban fantasy on bookstore shelves by virtue of its emotional depth and likeableness.  No word yet if there’ll be a fourth book (and more) in this series, but I’m really hoping there will be.  In the meantime, the first book in Kane’s new series, Unholy Ghosts, will be coming out on May 25th, and as I’m thoroughly addicted to Kane’s writing, I’m looking to pick up a copy so I can feed the need.

If you enjoy riveting urban fantasy with a believable, flawed heroine and a smoking-hot hero, pick up Demon Possessed—hell, pick up the entire series.  You’ll be glad you did.