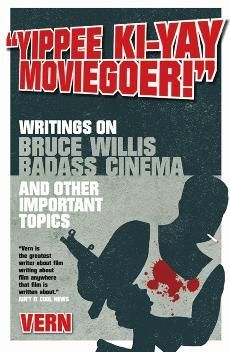 With the hilarious “instant cult classic” Seagalogy: A Study of the Ass-Kicking Films of Steven Seagal, Vern wrote a book that shook the very foundations of film criticism, broke their wrists, and then threw them through a window. Now he’s back, and this time he’s got all of ‘the films of badass cinema’ in his sights... From Die Hard to The Discrete Charm of the Bourgeoisie, Transformersto Mary Poppins, Vern has an opinion on everything, and he’s not shy about sharing them...

I received this book for free from Purchased in exchange for an honest review. This does not affect my opinion of the book nor the content of my review.

Yippee Ki-Yay Moviegoer isn’t so much a book about Bruce Willis as it is a collection of Vern’s reviews from years past, but aside from the slightly misleading title (it does say “And Other Important Topics”), I really enjoyed the hell out of this book. Vern’s reviews and rants are funny, irreverent at times, reverent at other times (or at the same time), and are often surprisingly insightful.

As I’m sure you’ve gathered from reading this blog, I love pop culture. Back in the ivory tower of academia, I tried my damnedest to work in pop culture whenever I could, and I was lucky enough to have a department that was very openminded about that sort of thing. My film studies professor would grumble about my choices of films in his classes, but by god, I wanted to talk about Serenity and Sleepy Hollow and the first two X-Men movies.

So I read Vern’s reviews with that unfortunately tendency of recent grad students to pick them apart. To my surprise, the vast majority of them passed my film geek litmus test. His rant about Michael Bay’s Transformers was not only hilarious in its righteous indignation but also very, very true. Vern makes solid arguments about why Bay’s quick-cut-can’t-tell-what-the-hell-you’re-looking-at directing style is crap and why Hollywood shouldn’t go down that path when it comes to action. I’ll admit that I often enjoy movies that don’t require any kind of brain-engagement, but Vern makes a damn good point. Summer blockbuster does not equal stupid movie with explosions, and it’s time for moviegoers to stop buying into that idea. Let’s get back to smart action films like Die Hard and Aliens.

If you’re a stickler for proper grammar and spelling, you might need to take a valium before reading this book. Vern’s writing style is not terribly polished, and he often misspells characters’ names (reading Hans Solo made something inside of me shrivel up and die), but at the same time, that style is part of his charm. He doesn’t give a shit if his reviews pass muster with a picky writer like me. He just wants to talk about movies, damn it.

And talk he does. One of my favorite reviews is for They Live, a movie I’ve never actually seen but have heard of. Specifically, I’ve watched the five minute long ass-kicking scene in the alley, the whole purpose of which was for our mulleted hero to get his buddy to put on a pair of damn glasses so he could see the aliens. My friends and I watched that scene and laughed at it. But Vern’s review made me actually want to watch the whole thing to see if his point about the movie’s representation of the Reagan-era US is right. Whether it is or not, it’s definitely a thoughtful review of a movie most people wouldn’t even bother watching.

I think that’s the thing I appreciate most about this book. The majority of the movies he reviews are ones that people don’t take seriously. They’re action films and horror films and what have you, and many people think those aren’t worth talking about. I’m of a mind, though, that pretty much everything our culture produces is worth looking at and talking about (which is probably why I liked grad school so much, hehe), and so it was really great to be both enlightened and entertained by Vern’s reviews. Good stuff. 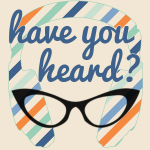 Review: Within These Walls by Ania Ahlborn