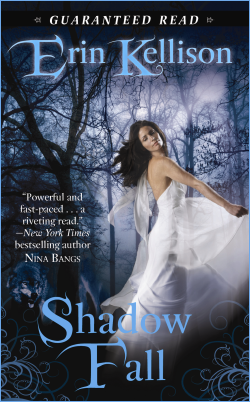 Custo Santovari is a fallen hero, a man who sacrificed himself for his best friend, an angel who’s earned himself a well-deserved place in Heaven. But Custo wasn’t cut out for Heaven and he’s not going to stay. Especially not when he discovers he can return to earth to continue the fight against the soul-sucking wraiths and rescue a woman even more tempting than his eternal reward.

Warning! This review contains spoilers for Shadow Bound, the first book in Kellison’s series. It’s kind of unavoidable. :( If there were a way for me to talk about the events in book 2 without referencing the end of book 1, I’d do it, but alas! I kind of have to. So, if you haven’t read Shadow Bound, beware spoilers here!

I have to admit, I was a bit surprised when I cracked open Shadow Fall and discovered that it’s not about Adam and Talia, the couple at the center of Kellison’s first novel, Shadow Bound (read my review here). After that initial bit of disappointment, I found myself quickly sucked into the new couple’s storyline.

Custo Santovari, Adam Thorne’s right hand man, died at the end of Shadow Bound, and much to his surprise, he finds himself ferried through the Shadowlands to the gates of Heaven. Custo had always tried to do his best, but he knew he wasn’t a good person. When he discovers that he’s been promoted to angel, he’s sure someone screwed up. Instead of getting used to life in Heaven, he spends his time prowling the walls, and when Shadowman, still mourning his lost love, appears at the gate, Custo makes a shady deal. He’ll swap places with Shadowman, letting the Fae into Heaven while he escapes into the Shadowlands. While looking desperately for a way back to Earth, he sees a beautiful dancer being stalked by a wolf, and he can’t help but intervene.

Annabella is a ballet dancer, just promoted to the starring role, and she has an unusual talent. When she concentrates on her dance, she can breach the boundary between the mortal world and the Shadowlands, and unfortunately her talent has captured the attention of the wolf, a shadowy hunter who is bent on making Annabella his. When Custo bursts back into the mortal world, accidentally dragging the wolf with him, he finds himself attracted to Anna; he not only wants to protect her, but he wants her. Together, the pair must evade the wolf and find a way to send it back to the Shadowlands.

I found myself really drawn in by the characters in Shadow Fall. Custo is a complicated, conflicted sort of guy; as the reader, you know he’s a good guy, but he just can’t believe that. From his illegitimate beginnings to his rough-and-tumble upbringing to his job doing Adam’s dirty work, Custo isn’t easy to pin down, but you just know that he’s good inside. All of the bad things he does, he’s doing for the right reasons.

Annabella is likewise an interesting character, even if she’s not as complex as Custo. She’s finally realized her dream of being a star ballerina, only to have her sudden (and unfortunately unexplained) ability to tap into the Shadowlands surface and threaten to ruin everything. She’s smart and confident, and while she occasionally loses her cool–and with good reason–she always pulls herself together and holds her own. This is the kind of heroine I want to see more often in paranormal romances. The progression of her relationship with Custo felt completely natural, as something that starts as pure physical attraction and turns into something more as they go through harrowing experiences together.

The wolf is intensely creepy, particularly in his ability to change shape and possess others. I won’t go into detail, but I’ll just say that his snake-like attack on Anna left me shuddering. His motivations aren’t exactly clear, though, other than that he is a hunter and therefore he hunts Anna. I would have liked a bit more out of him, but he is an effective villain.

Shadow Fall fits into the world-on-the-edge established in Kellison’s first novel, where the supernatural is beginning to filter into the mortal world, and people are beginning to become aware of the wraith threat. I was very pleased to see the mythology expanded in this book. It’s a fascinating blend of different cultural mythologies, and I’m very hopeful that we’ll get to see more of this world very soon.

This is a very solid sequel that only falters in its lack of explanation of some key points, such as Annabella’s magical ability. However, the strong characters; believable, sexy romance; and strong worldbuilding overshadow that flaw by far. I enjoyed Shadow Fall very much, and I’m hoping I’ll hear about a sequel soon.

Review: Trailer Park Fae by Lilith Saintcrow
Review: The Circus of the Damned by Cornelia Grey