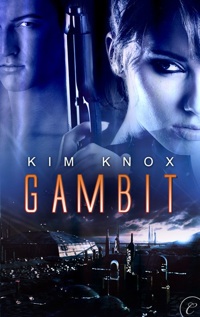 Captain Chae Beyon is a hustler, a mercenary pilot, a wounded woman who prefers her men to be easily thrown aside.

Daned Traern is a first-caste Ladaian bound by tradition and DNA to protect his race. He's willing to align himself with the hot space captain if she'll transport him home in time to ensure the right candidate is crowned—and thus prevent a bloody war.

Disguised as Chae's sex toy, Daned is erotically bound to her through living gold, alien tech designed to increase pleasure. When he frees himself, their passion only increases...but succumbing to temptation will bind them together—permanently.

But there's more at stake than their needs. As Chae is dragged into a world of insane princes and sentient stones, hired killers hound them across the quadrant.

And then, as only her lousy luck would have it, Chae must choose between the good of the galaxy and her own heart...

We’re dropped right into the action, which is always a good way to start a story. Chae, our smart-assed, messed up heroine, is suffering the effects of a truth device while being “interviewed” for a dangerous transport job. She takes the job and soon finds out that she’s bitten off more than she can chew as she and Daned, the sexy handler she has to get to Ladaia Prime, her mother’s birth planet, so his family can claim the empty imperial throne.

The first half of Gambit was thrilling. I love the inventive universe, with its manufactured sex partners, mind-altering metals, and gritty settings, and I love that the heroine isn’t the most likable character. She’s wary of intimacy, which is why she buys her “flesh” rather than seeking out human partners, and her rough-and-tumble background makes her a tough, self-sufficient woman. She’ll cheat you before she’ll help you, and it was refreshing to have a heroine with an attitude like that. She isn’t the typical spunky heroine, nor the kind of bad-ass heroine who’s really a big softy inside. As she starts to soften toward Daned, I could really believe that she was feeling some seriously life-changing emotions.

Which is why I was so startled at the sudden change halfway through the book. I don’t want to spoil it for you, but when Chae and Daned make it to Ladaia Prime and find themselves in a struggle for the throne, I suddenly felt like I was reading another book that was tacked onto the end of the first one. The story’s pace slowed down considerably, so that the final climax of the book felt like less of a climax than the exciting mid-point pinnacle in action.

By the end of the book, I felt like the happy ending was a bit manufactured, and I think that’s because the book felt short to me. Since it’s an ebook, it’s difficult to say exactly how long it is, but the feeling of shortness could be because of the pacing. The first half was very tense and exciting, and then it dropped off and meandered for a while, then dashed to a second climax and boom, the end.

Gambit had a lot of potential, and I really love the SF setting. There’s not enough SF romance in my life. I just felt like I was being rushed to a conclusion that sadly felt unnatural based on the awesome first half of the book.