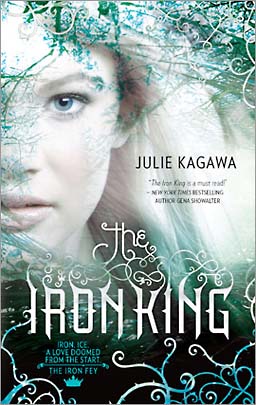 The Iron King by Julie Kagawa

Meghan Chase has a secret destiny--one she could never have imagined...

Something has always felt slightly off in Meghan's life, ever since her father disappeared before her eyes when she was six. She has never quite fit in at school...or at home.

When a dark stranger begins watching her from afar, and her prankster best friend becomes strangely protective of her, Meghan senses that everything she's known is about to change.

But she could never have guessed the truth-- that she is the daughter of a mythical faery king and is a pawn in a deadly war. Now Meghan will learn just how far she'll go to save someone she cares about, to stop a mysterious evil no faery creature dare face...and to find love with a young prince who might rather see her dead than let her touch his icy heart.

The Iron King treads familiar ground, if you’re a fan of faery stories, but Kagawa strikes out into exciting, imaginative new territory. I love a good faery story, and it was lovely to find one that involves not only the Seelie and Unseelie Courts, but also the Iron Court, what is undoubtedly the most interesting part of this novel.

Meghan Chase is a fairly average teen lit protagonist. She’s an outsider in her school, one who desperately wants to fit in but is constantly shunned by her jerky peers. The trick played on Meghan by her former crush, the school quarterback, was hideous enough to make me cringe in sympathy. My own days in high school were pretty mellow, but even the fictional threat of public humiliation is enough to make even the most confident person blush in vicarious embarrassment.

Luckily for Meghan (or perhaps unluckily), her best friend Robbie Goodfell (if you’re a faery fan or a Shakespeare reader, this guy will be instantly familiar to you) isn’t what he seems. When Meghan’s younger half-brother is kidnapped by faeries, he reveals that he’s actually Puck, a faery beholden to Oberon, the Seelie King who also happens to be Meghan’s father. And Meghan sets off into the Nevernever to hunt down her brother.

I liked pretty much everything about this book. Meghan begins to blossom nicely as a character; the side characters, from Puck to Grimalkin the Cat Sith, are fascinating and well-created; and the storyline is engrossing. As an aside, am I the only one who read Grimalkin’s dialogue in Stephen Fry’s voice?

My only major problem with The Iron King is that the love triangle… well, sort of a triangle, in which Meghan crushes on Ash, the Unseelie prince, and it’s pretty obvious that Puck is in love with Meghan, feels manufactured. Ash isn’t much more than a cardboard standee in this book; he’s very handsome, he’s cold and distant, and Meghan is inexplicably in love with him. I was even more mystified that he suddenly went from being an arrogant jerk to falling in love with a half-Summer fey, half-human teenage girl. I had serious trouble buying into that side of the love triangle, and it would have made a lot more sense to me for Meghan to realize she has more than friendly feelings for her long-time friend Robbie/Puck.

But aside from that, I really liked this book. The Iron Fey are incredibly interesting to me, mainly because they make so much sense. All of the old faerie stories come from a time when human culture wasn’t mechanized. What is humanity’s imagination creating now that we basically live our lives jacked into computers all the time? I am very interested to see what Kagawa does with the Iron Court.