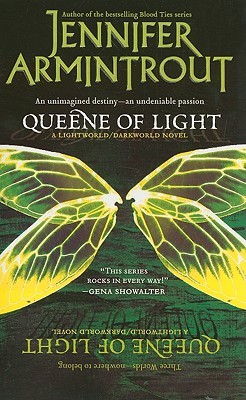 Queene of Light by Jennifer Armintrout

In a time not long from now, the veil between fantasy and reality is ripped asunder—creatures of myth and fairy tale spill into the mortal world. Enchanted yet horrified, humans force the magical beings Underground, to colonize the sewers and abandoned subway tunnels beneath their glittering cities.

But even magic folk cannot dwell in harmony, and soon two Worlds emerge: the Lightworld, home to faeries, dragons and dwarves; and the Darkworld, where vampires, werewolves, angels and demons lurk.

Now, in the dank and shadowy place between Lightworld and Darkworld, a transformation is about to begin….

Ayla, a half faery, half human assassin, is stalked by Malachi, a Death Angel tasked with harvesting mortal souls. They clash. Immortality evaporates, forging a bond neither may survive. And in the face of unbridled ambitions and untested loyalties, an ominous prophecy is revealed that will shake the Worlds.

Series: Lightworld/Darkworld #1
Published by Mira on 29 September 2009
Genres: Speculative Fiction, Urban Fantasy
Pages: 384
Format: Paperback
Find this book on Goodreads
Buy the Book at: Amazon
This book contains potentially triggering material. You can find details of potential triggers at the end of this review.

I really wanted to like this book. I mean really wanted to like it.  The worldbuilding is really fascinating and well done.  I like the little bits of mythology that seep through the narrative.  But man, I just couldn’t get myself to care about the characters.  I made it about 250 pages in and had to give it up.

Ayla is half-human, half-faerie, and she’s clawed her way from the very bottom of Underground society to the rank of assassin for the Queene of Light.  She has an interesting origin and interesting motivations, but… she just felt like a wet rag.  I get that she feels like she has to knuckle under on stuff, particularly what Garrett, her mentor, wants from her, but it also felt really creepy.  She agrees to become his mate because she doesn’t feel that she can say no (among other reasons), and the first time they have sex is just… creepy.  She’s not feeling it and drifts into a vision in the middle, but the whole situation feels coerced and on the rapey side.  Cue shudders.

On the other side is Malachi, a death angel who fell when he touched Ayla (apparently angels cannot touch mortals).  He’s been turned mortal and has to get used to actually living in the Underground instead of just floating around taking souls.  He could be a really, really cool character, but he mostly just comes off as a hyper-alpha male asshole.  He’s not used to human courtesies, which is understandable, but he’s not terribly adaptable, either.  I mostly just wanted to throw things at his head for being a jerk to everyone around him.

And then there’s the romance.  Really, I don’t think I would call this novel a romance.  It’s more of a dark urban fantasy with sexual elements, because the “romance” between Ayla and Malachi really doesn’t involve emotion and a relationship.  It’s more of a fated thing that they don’t understand and that wasn’t explained in the part of the book that I read.  That’s a personal pet peeve of mine; I like relationships that grow, and this one doesn’t really grow beyond having visions and occasionally making out.

It could just be that I’ve been in an uncharitable mood toward the book, but I just didn’t want to read any more of it.  Hopefully I can come back to it later and give it another try, but right now, my lack of connection to the characters trumps any interest I have in the world.