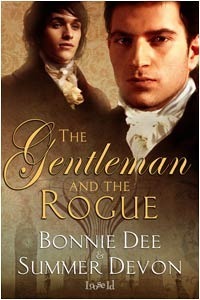 The Gentleman and the Rogue by Bonnie Dee, Summer Devon

A lad from the streets meets a lord of the manor...

When Crimean war veteran Sir Alan Watleigh goes searching for sex, he never imagines the street rat he brings home for one last bit of pleasure in his darkest hour will be the man who hauls him back from the edge of the grave.

A night of meaningless sex turns into an offer of permanent employment. As Alan’s valet, Jem offers much more than polished boots and starched cravats. He makes Alan smile and warms his bed. Just as the men are adjusting to their new living arrangement, news about a former soldier under his command sends Sir Watleigh and Jem on the road to save a child in danger.

The journey brings them closer together as they travel from lust toward love. But is Alan's love strong enough to risk society discovering the truth about him?

Published by Loose Id LLC on 2010
Pages: 225
Format: eBook
Find this book on Goodreads
Buy the Book at: Amazon
This book contains potentially triggering material. You can find details of potential triggers at the end of this review.

I liked this book, but didn’t love it. It’s not that it’s a bad book, because it’s not at all. It’s well written and I like the characters well enough, it’s just that it’s easily forgettable once I’ve finished reading. There’s not a lot of depth to the plot and the character backgrounds weren’t as developed as I would’ve liked. This is also one of those romance’s where the romance/fall in love period happens in the span of a couple of weeks, so the lust  to love ratio speeds up because of it. Although, that’s usually a standard for almost all romances in general, so I can’t really fault the book for that. It’s just a little dissatisfying because it’s so quick and we don’t have a lot of foundation for the protagonists to build off of.

The story begins in Regency England with rent-boy, Jem, being picked up by a wealthy man, Sir Allan, who discreetly takes him back to his home for a night of illicit passion. All the servants have been dismissed for the evening, except the one who drove the carriage, so as not to make anyone suspicious that their master likes cock. Jem and Allan have some lusty sex and it’s hot, but this is where the lust to romance escalates a little too quickly, in my opinion. Allan doesn’t want to send Jem home for reasons he can’t quite explain to himself. Jem is also feeling the need to linger. So, after delaying for as much as possible, Sir Allan decides to give Jem a job as his valet.

There’s about a week that passes before the men give in to their passions again, not for lack of trying on Jem’s part because he loves sex, but Allan has a lot of guilt. In that time we learn that Allan was a captain in the military, that his servant, Badgeman, was one of his men, and they were both injured. There’s not a whole lot of depth after that. We don’t get more to go on other than the surgeon, Schivvers, (who ends up being the bad guy by the end) was a creeper who liked to cut up and operate on dead bodies. Although, that wasn’t really unheard of  by doctors of that time period, so I’m surprised that was a shock to anyone. And as for Jem’s background, he starts to talk about his first time to ever have sex with a man, but he doesn’t go into detail and never talks about that again. He just makes a bawdy joke and moves on. That’s Jem’s thing. He makes jokes when he’s uncomfortable and tries to make things seem less serious than they are.

I feel like there is a lot of stuff we, the reader, miss out on by not having Jem’s history explained and explored more. We get to see a couple of his friends from the street, and when they try to hit Jem up for some cash since he’s all high society in their opinions, they’re quickly shooed out by Allan and they never return in the story again. It just felt like a wasted opportunity to have some drama thrown at the two lovers. The romance between them, in general, felt like it could use a little more something than what was given. It was too quick, too easy. There were moments of distrust, but they were overcome two pages later.

And as for the antagonist, Mr. Schivvers, he’s not much of a Big Bad. He is legitimately creepy, but he’s not in the book long enough to really warrant being the main bad guy. He felt more like a minor bad guy the protagonists overcome before they have to face the real bad guy. He’s not even Allan or Jem’s problem. Not really. He’s Badgeman’s problem. Schivvers has taken in the daughter of a deceased soldier, whom Badgeman swore an oath to, as his ward. And this is the creepy part. Remember when I said he liked to operate on corpses? It doesn’t end there. He likes to experiment with emotional manipulation on people and see how that affects a person in the long run. He takes this girl, emotionally abuses her, literally chains her by the neck like a dog to the leg of his bed, makes her sleep on the floor and crawl, and reinforces that he’s the only one in her life that “cares” for her; all as an experiment to witness the point when an innocent loses said innocence and is completely broken. There is some suggestion that he also physically abused her, and possibly sexually, as well. It’s very squicky and Schivvers is a HUGE creep. So, props to the authors for making me feel sick when it comes to him.

Props again for the fact that Jem and Allan knew enough not to touch the girl without her permission, unless it was a matter of life or death. They even swore and oath to her that they wouldn’t allow anyone to touch her ever again without her consent, unless it was an absolute emergency. I really liked that they recognized that kind of abuse the girl suffered needed special care on the road to recovery. So, very good choice there.

A not so good choice, however, was the authors’ choice of wording during the sex scenes between Jem and Allan. Several times they used words like “bunghole” and “sphincter” in the narrative. There were other odd word choices, but those were the ones that stood out the most, because those are the most unsexy words to use in sex scene narratives ever! It may have been during parts where we were in Jem’s POV and he’s not exactly upper class, but that is really no excuse to use such awful wording when describing an asshole. I was nearly thrown out of the book every time a term like that popped up. They also used “penis” a lot, which is fine, but it’s just too clinical a term, in my opinion. I prefer sex scenes to just use the word “cock”. Not “pole” or any other euphemism, just plain cock.

So, did I enjoy this book? Yes, despite its problems. Would I recommend it to a friend? Probably not. If you want a quick read with no real depth and a romance that has a decent amount of smut, but no real basis for love between the protagonists because not enough time was spent showing their growth from lust to romance, then this book might tickle your fancy.