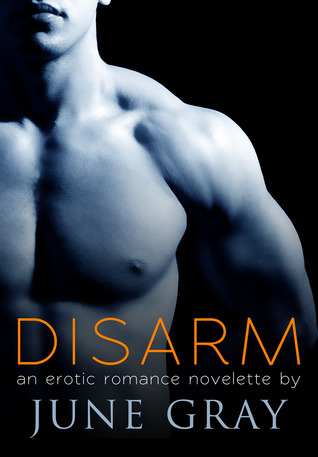 Even the deepest secrets always find a way to surface... 26-year-old Elsie Sherman has had a crush on her brother's best friend, Henry Logan, since she was twelve years old. Unfortunately, Henry has only ever treated her like a younger sister, stepping into her brother's shoes after he was killed in action. That is, until one night, when one dance ignites a sensual fire between the two, leaving Elsie aroused and confused. Is she allowed to lust after her surrogate big brother who also happens to be her roommate? But Henry, an Air Force officer, has been harboring two secrets--one will bring them together and the other will tear them apart--and it is up to Elsie to decide if their relationship is worth fighting for.

I will admit that I went into this story with somewhat lowered expectations due to its 14,000 word count. On the other hand, I gave it a shot because of that short length… and the gratuitous man titty on the cover. In this case, judging a book by its cover was a positive thing.

While this is advertised as an “erotic romance novelette,” I felt as though there was not enough time devoted to developing our lead characters, Elsie and Henry, before getting into the romance and sex. From the first page, we are dropped into Elsie’s thoughts about “grumpy-bear” Henry (no, she really says that in the narration) and his five week-long brooding festival. I’m going to address my first pet peeve here: I dislike reading novels in the first person because I never feel as though I can get into the story as well as I could with third person narration. So, when I started Disarm and realized that everything was being told from that perspective, I was a little annoyed. Elsie’s narration is overly cutesy at times (see also, “grumpy-bear”) and somewhat immature for a woman in her mid 20s. It felt like I was being told a story by her and not brought into their world which really detracts from what could be a great story. Given their lengthy history, I wanted more build-up to the sex, and it would have made the ultimate separation at the end when Henry deploys all the more emotional. Sex is great, but the payoff is so much better when the connection between the two characters is strong.

Henry, well, I wasn’t sure what to make of him when I was dropped into the opening bar scene. He is moody, scowling at Elise for using a bit of cleavage to get the bartender’s attention, and then when she asks him what his problem is, he turns on the sexy face and suggests they “do other things.” Frankly, he comes off as a moody asshole in that first scene, even if it is pointed out by our narrator that he had been acting strange lately. It eventually comes out why he had been acting weird and secretive around his close friend and roommate, and he turns out not to be such a sullen jerk as he seemed. Both characters finally start communicating with each other instead of changing the subject or leaving the room, which was nice to see given the dubious opener.

For all the issues that I had with the writing style and characterization, Gray’s sex scenes are written far more to my taste than most romance or erotica that I’ve read. The word “cock” is actually used. Yes, Virginia, there is a cock in this story. I was so excited by this, that I noted it as I was reading along with my other thoughts.

Something that I particularly liked and can’t say I’ve come across outside of reading fanfic is Elise and Henry’s safe sex talk. I know some people find it pulls them out of a scene, but I think that it can be just as sexy and adds a level of realism to the characters. There aren’t not any magical simultaneous orgasms thankfully, though Elise gets off very quickly. I wasn’t sure whether I should roll my eyes or be impressed by that detail. Bonus points for including a scene where Henry goes down on Elise – something I feel should be included more often in sex scenes in general.

There are five more installments in this series, and an upcoming compilation of them next year. I would have preferred them to be made into one book with more character and plot development. Since my copy was free through the library where I work, I didn’t have to worry about paying $2 USD for roughly fifty pages. Overall, it was a halfway decent story that had its clichés and pitfalls, but maybe a better editor might have helped Gray pull more out of her story. I plan on reading the second book and see if things improve, I just have to wait for a copy to become available.

Virtually Yours Anthology on Sale!

Slut Shaming in Romance, or Give Me Your Sex Positive Romance Recs!