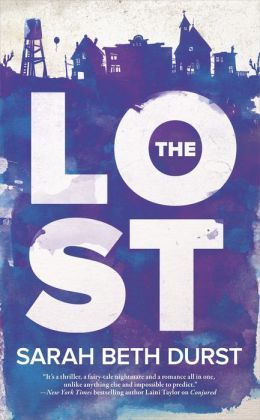 The Lost by Sarah Beth Durst

Award-winning author Sarah Beth Durst has been praised for her captivating novels that merge the darkly imagined with very real themes of self-discovery and destiny. In The Lost, we'll discover just what it means to lose one's way….

It was only meant to be a brief detour. But then Lauren finds herself trapped in a town called Lost on the edge of a desert, filled with things abandoned, broken and thrown away. And when she tries to escape, impassible dust storms and something unexplainable lead her back to Lost again and again. The residents she meets there tell her she's going to have to figure out just what she's missing—and what she's running from—before she can leave. So now Lauren's on a new search for a purpose and a destiny. And maybe, just maybe, she'll be found….

Against the backdrop of this desolate and mystical town, Sarah Beth Durst writes an arresting, fantastical novel of one woman's impossible journey…and her quest to find her fate.

There’s something very magical about The Lost, and I don’t necessarily mean the magical realism setting of the story. It’s a haunting story told in intimate, rich detail. It takes several chapters for things to really start moving, but once the plot started to progress, I was swept up in it and ended up loving this book.

Lauren Chase is somehow both well-defined as a character and also near-universally relatable. I’ve never gone through what she is going through, but I identified with her so strongly that I ended up bursting into tears several times during this book. The setting and concept are fascinating, but having Lauren as the point of view character is what really made this book for me. She’s frustrating and sympathetic and clever and curious, and her reaction to finding herself in Lost, the place where forgotten things and people go.

The setting itself really stuck with me. Lost is literally lost; it floats somewhere outside of normal reality, but it’s made up of the most mundane items that slip through the holes in our world: single socks, keyrings, half-eaten sandwiches, even entire houses, and of course, people. It reminded me of liminal spaces in Neil Gaiman’s novels, like London Below in Neverwhere or the Other House in Coraline. These spaces on the edge of reality exist so characters can learn something about themselves and emerge a changed, more mature person. In The Lost, Lost exists for exactly that purpose; people who end up there have lost or forgotten something, and they have to find what they’ve lost in order to move on. It’s a simple but really evocative concept.

I have to admit, I was a little wary of this book at first. It’s written in first person POV, present tense, and short, choppy sentences abound. Normally, those three things form the Trifecta of Stylistic Choices Pamela Doesn’t Like, but the more I read, the more I found myself completely sucked into The Lost, to the point where I didn’t even notice the sentence length or present tense verbs.

So let this be a lesson: don’t automatically give up on a book because of a stylistic pet peeve. Give it a little longer. The book just might surprise you.