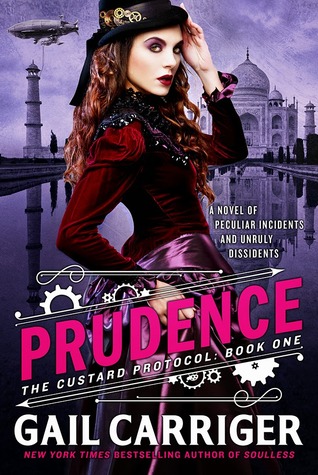 From New York Times bestselling author Gail Carriger comes a new novel in the world of the Parasol Protectorate starring Prudence, the daughter of Alexia Tarabotti.

When Prudence Alessandra Maccon Akeldama (Rue to her friends) is given an unexpected dirigible, she does what any sensible female would under similar circumstances - names it the Spotted Crumpet and floats to India in pursuit of the perfect cup of tea. But India has more than just tea on offer. Rue stumbles upon a plot involving local dissidents, a kidnapped brigadier's wife, and some awfully familiar Scottish werewolves. Faced with a dire crisis and an embarrassing lack of bloomers, what else is a young lady of good breeding to do but turn metanatural and find out everyone's secrets, even thousand-year-old fuzzy ones?

I’m already a fan of Gail Carriger’s work. The Parasol Protectorate books are witty and entertaining, and so I was excited to read Prudence, the first book in her new Custard Protocol series set in the same universe. Prudence is a charming adventure that dips its toes into the problems of colonialism in India while still sitting squarely within the very British Imperial setting of this world.

Most of the cast is made up of people we’ve seen before in the Parasol Protectorate series, and it’s wonderful to start new adventures with the children of the characters I loved so much in Carriger’s first series. Rue is a delight, very different from either of her biological parents, probably thanks to the influence of her adoptive vampire father, Lord Akeldama. She manages to be bold and wild while still (mostly) keeping to the social rules of their supernatural Victorian era. Outwardly (and to her own perception), she’s as different as can be from her mother, Alexia, but they’re really not that different (except for Rue’s refusal to wear bloomers). They’re both adventurers at heart, even if Rue isn’t quite aware of the wildness beneath her mother’s staid appearance.

Primrose and Percy Tunstall, the twin children of Alexia’s best friend Ivy, are delightful in their own, very different ways. Prim is Rue’s polite society conscience, even though she’s always by Prim’s side during their misadventures (and is coming to be known for riding on the back of a werewolf through London, much to her chagrin). Percy is bookish and absentminded, though he doesn’t really fall into the stereotype trap that often comes with bookish professor characters.

Quesnel Lefoux is turning out to be my new fictional crush, dang it. He’s as clever and mechanically minded as his mother and as rakish as she as well, but I love how Carriger writes him. He’s a rake, to be sure, but one that blushes when Rue unexpectedly turns from werewolf back to human and one who very obviously (to the reader if not Rue) as sincere affections for her. He’s charming and kinda dreamy. I approve.

Prudence took a little while to really start rolling. Much of the first third of the book is concerned with reintroducing you to characters you’ve only read about as toddlers (or in Quesnel’s case, a young boy) and setting up Rue’s place within the world of her three parents. I was a little impatient for the meaty part of the plot, but by the time it started really rolling, I was enjoying it very much.

There is a problem that is glossed over in a lot of steampunk involving the British Empire, and that is the empire itself. Colonialism left very ugly scars on the world, and it seems like a lot of authors very deliberately ignore that in favor of fantasy involving pith helmets and dirigibles floating to exotic locales.

Carriger’s work is not the proper vehicle for dealing with the social injustices of colonialism, but she doesn’t ignore the fact that it’s problematic. Rue herself is a product of her British upbringing; she believes the Empire is bringing civilization (specifically in its recognition of supernatural beings) to the world, and that the world should be grateful. But in the plot (involving potential tea plantations, Indian supernatural beings, and the good old British army), we do see characters who are dissatisfied with the British status quo. We even see it to a point through the eyes of Indians who are very unhappy with the British attempts to meddle in the structure of their society. Rue herself starts to question her own assumptions as a British citizen, and it did feel like good character growth.

The ending feels a bit rushed, but it does come to a satisfying close as far as this plot is concerned, and it also leaves things wide open for future books in this series. Color me thrilled at the prospect. Prudence is as droll and amusing as its Parasol Protectorate forebears. You don’t have to have read the first series for this one to make sense, but it definitely does help, and if you’re already a Carriger fan, you’ll love this book. 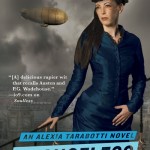