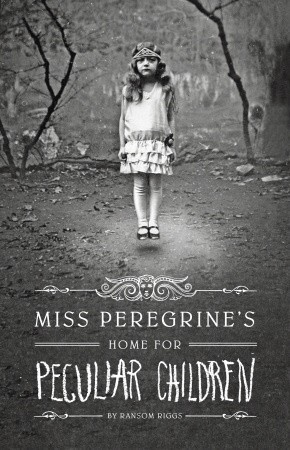 A mysterious island. An abandoned orphanage. A strange collection of curious photographs.

A horrific family tragedy sets sixteen-year-old Jacob journeying to a remote island off the coast of Wales, where he discovers the crumbling ruins of Miss Peregrine’s Home for Peculiar Children. As Jacob explores its abandoned bedrooms and hallways, it becomes clear that the children were more than just peculiar. They may have been dangerous. They may have been quarantined on a deserted island for good reason. And somehow—impossible though it seems—they may still be alive.

A spine-tingling fantasy illustrated with haunting vintage photography, Miss Peregrine's Home for Peculiar Children will delight adults, teens, and anyone who relishes an adventure in the shadows.

Somehow, I managed to go into this book with zero expectations and very little knowledge of the plot. I blame my recent book slump for being totally oblivious to pretty much everything but the title. But going in blind actually worked out quite well for me, based on some of the reviews I’ve read on Goodreads. I was able to enjoy Miss Peregrine’s Home for Peculiar Children without any expectations about how scary or creepy or like Harry Potter other readers might think.

I finally decided to pick this up because I watched the trailer for Tim Burton’s film adaptation. I used to be a huge fan of Burton’s work, before he fell into the Johnny Depp/Helena Bonham Carter hole, and I was really intrigued by the look and feel of his Miss Peregrine. It reminded me of his older works, and that got me interested in the book itself.

First things first: this book really isn’t scary. It was apparently marketed as such, but honestly, it’s not scary at all. It has some creepy stuff and some tense moments, but it’s more like a rather loving circus freak show than a horror story.

It starts out with Jacob Portman growing into adolescence under the shadow of his grandfather Abe’s wild and fantastical stories about his own youth. Abe was a child refugee in WWII who ended up at a home on a tiny Welsh island, and Jacob grows up hearing wild stories about strange children and terrifying monsters. As children are wont to do, though, Jacob grows up and grows cynical, choosing to believe the stories are nothing more than fairy tales.

When Abe is brutally attacked and dies in Jacob’s arms, both his mysterious last words and the horrifying creature Jacob sees in the woods haunt him. Eventually he convinces his father to travel with him to the island so he can resolve his grief, or so he tells his parents. He really wants to investigate the derelict orphanage and try to make sense of his grandfather’s stories once and for all.

I really liked this book and found it to be an engrossing read despite the slow pace of the beginning. It takes a while for things to move beyond the “normal” world, and I was really anticipating all of the weirdness, so it did feel like it took a little too long to get there. The overall plot, too, felt a bit stretched out, as if the book could’ve been shorter if the story had been streamlined.

But those criticisms aside, I enjoyed it a lot. Jacob is a good protagonist in that he embodies the cynical exhaustion of a teenager while not crossing the line into obnoxiousness. He smarts off and slacks off and gets angry, but I never found myself rolling my eyes or wanting to smack him.

The peculiar children are a little less well-developed, but I still liked them. There is a fairly large cast of important characters (and an even larger cast of minor supporting characters), so it could be that there just wasn’t room to flesh everyone out as much. It’s a bit of a bother, but the main supporting characters are still likable and interesting.

I’ve already got the second book lined up in my Kindle app, so suffice to say that despite its flaws, I really enjoyed this book, and I’m looking forward to reading the rest of the series. I’m also hoping Burton’s film is a good adaptation and a return to the Burtonesque aesthetic that I’ve always loved.