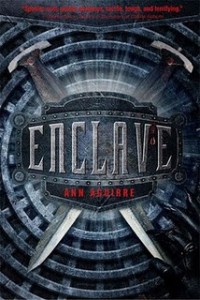 New York City has been decimated by war and plague, and most of civilization has migrated to underground enclaves, where life expectancy is no more than the early 20's. When Deuce turns 15, she takes on her role as a Huntress, and is paired with Fade, a teenage Hunter who lived Topside as a young boy. When she and Fade discover that the neighboring enclave has been decimated by the tunnel monsters--or Freaks--who seem to be growing more organized, the elders refuse to listen to warnings. And when Deuce and Fade are exiled from the enclave, the girl born in darkness must survive in daylight--guided by Fade's long-ago memories--in the ruins of a city whose population has dwindled to a few dangerous gangs.  Ann Aguirre's thrilling young adult novel is the story of two young people in an apocalyptic world--facing dangers, and feelings, unlike any they've ever known.

I’m a big fan of Ann Aguirre’s novels, so I was very excited to hear that she’s branched into young adult fiction. I was even more excited when I heard her first teen novel is dystopian/post-apocalyptic. See, I also love post-apocalyptic stories, and though the YA market has been kind of flooded with them lately, I was very interested to see how Ms. Aguirre would handle her own dystopia.

I’m pleased to report that Enclave does not disappoint. It is dark and gritty and frighteningly realistic, and the characters are fascinating.

We meet Deuce, the teenage protagonist, as she is being promoted from a nameless brat to a Huntress, one of the elite enclave members who are tasked with bringing back meat and defending their underground home from Freaks, zombie-like creatures who eat flesh and threaten the safety of the enclaves scattered beneath the ruins of New York City. She is partnered with Fade, a teenage boy who despite being accepted by the Enclave is still an outsider, since he was found wandering the tunnels and claimed to have lived Topside.

With post-apocalyptic novels, the settings are for the most part similar. Some sort of disaster has struck, and the survivors live in small pockets, defending themselves against the outside world. Enclave is no different in the general setting, but what fascinated me most about it is what little we’re told of the world and what happened to it. The book begins in an enclave underground, a little fortress in the tunnels beneath New York City and eventually takes the reader aboveground, into the ruined world.

The underground world is intriguingly alien, a smoky, cloistered world in which anyone who lives to twenty-five is considered old, and everyone expects to die young. The people of Deuce’s enclave live under tight rule that’s comforting and oppressing at the same time. It was really interesting to watch Deuce come to the realization that the leaders of the enclave are doing terrible things in the name of protecting the group. As the reader, we come into the story knowing that leaders of little dystopian enclaves tend to do terrible things to keep their society going, but Deuce, having been raised there, is completely naive to it. Even though I knew this as a reader, I was still scared alongside Deuce when she and Fade are exiled to Topside.

Topside is nothing like what Deuce was told. Something terrible did happen in the past, as is evidenced by the ruined city and its ruined citizens, but the air is not deadly. The world, however, is just as deadly as underground, with gangs ruling their territories with violence and Freaks, who are no longer the mindless horde she knows from underground but who seem to be thinking and plotting against humans, roaming the streets.

While Topside, Deuce and Fade pick up two more companions, a gang leader called Stalker and a girl named Tegan, who helps Deuce and Fade escape from the gang. Together, they set out north, for a place Fade’s father said was clean and healthy, where they could grow food. The introduction of Stalker and Tegan bring sort of a love… er, square into the story, and I have to admit, I was a bit put out by this. I’m getting very tired of teen novels with love triangles, mainly because most of the ones I’ve read recently have felt very artificial. Luckily, the complex relationships and attractions in Enclave don’t feel forced at all; it felt more like the natural progression of feelings, especially for Deuce. She was raised to never think of herself as a sexual or romantic creature, and now that she’s free of the enclave’s structure, she’s finding herself confused about the feelings that have surfaced. At the same time, though, I’m still not a fan of the mixed up love story here. I definitely preferred just Deuce and Fade by themselves.

The ending is very ambiguous, and I personally liked it. It’s not exactly a cliffhanger, but it’s obviously leading into Outpost, the next novel in the Razorland series that will hopefully come out in Fall of 2012. The blurb on the cover recommends Enclave to fans of The Hunger Games, and I think that’s a solid recommendation. Enclave has the same dirty feel as The Hunger Games with a tough heroine learning to make her way through a world that’s suddenly much larger than what she knows. I’m definitely looking forward to the next Razorland book.

Found on the Internets