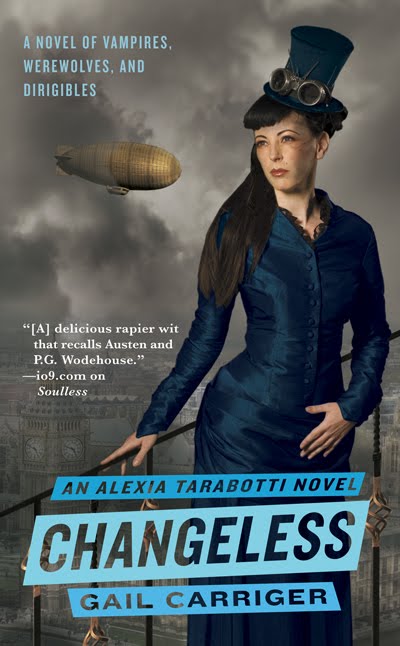 Alexia Tarabotti, the Lady Woolsey, awakens in the wee hours of the mid-afternoon to find her husband, who should be decently asleep like any normal werewolf, yelling at the top of his lungs. Then he disappears - leaving her to deal with a regiment of supernatural soldiers encamped on her doorstep, a plethora of exorcised ghosts, and an angry Queen Victoria.But Alexia is armed with her trusty parasol, the latest fashions, and an arsenal of biting civility. Even when her investigations take her to Scotland, the backwater of ugly waistcoats, she is prepared: upending werewolf pack dynamics as only the soulless can.She might even find time to track down her wayward husband, if she feels like it.

Three cheers for the return of Ivy Hisslepenny and her fantastic hats! Or, tragic head coverings, if you’re Alexia Tarabotti, now Lady Maccon, of Gail Carriger’s new “Parasol Protectorate” novel, Changeless. Our soulless (in the nicest possible way, mind) mystery-solver returns, and this time she has one more person she doesn’t quite heed: her husband. And he’s less than thrilled, but hey, he married her, right? I don’t know what I expected of this novel, because I was so enthralled by the previous installment, Soulless. Dirigibles, parasols, and supernatural investigation are givens, and with this in mind, Changeless definitely delivers. I might have wanted a bit more living-happily-together of Lord and Lady Maccon, but the Lord himself scampers off to Scotland on a mystery errand early in the book, leaving Alexia up to her own devices. Which, if he didn’t want her to get in trouble, her husband should have known better.

Werewolves are losing their ability to change, and this isn’t just a worry for the average “I was once supernatural and now I’m not” wolfie, but an issue for the military (that uses werewolves in a significant capacity) and for the government, which relies on both vampire and werewolf components. Alexia is on the case! I was intrigued by Carriger’s inventions, which I suppose shouldn’t be a shock – she has an excellent grasp of what I comprehend of Victorian science. Her books tend to steer me towards research (which I suppose many books do for me, but that’s another issue entirely), and the Victorian fax machine (called an aethographer) definitely prods my interest. And amidst this flurry of “modern” criminology, someone is also out for Alexia’s life. In addition to the usual cast, this time around Alexia picks up an old friend of her husband’s, a Madame Lefoux, who is an inventor of the first class. Besides being French (and Alexia comments on how she seems awfully affectionate, in that way that the French are purported to be), Lefoux is also a mistress of parasol production. Well, at any rate, producing things which look like parasols. One of my favorite lines concerns the multitude of uses this “parasol” has, and Alexia asks, if in all its capabilities, does it also function as an umbrella? Madame Lefoux is amusingly silent on the subject. We also get more of the story with regards to why Conall Maccon left his pack in Scotland to come to England. Of course, we’re grateful, as it brought he and Alexia together, but previously it was a sore subject which was not discussed. Still sore, but this time the story could hinge on “ancient” history, so we’re enlightened. It endeared Conall to me all the more, despite seeming, sometimes, like the character we know the least about. I suppose that’s merely a victim of the story being told from Alexia’s POV. Even though it’s third person. However, this method is what allows the book to unfold like any classic mystery (you know, before we had CSI and we had good, fun, Sherlock Holmes and Agatha Christie?) – permitting the reader to piece together what they will and solve the case right alongside our straightforward protagonist.

Fashion is also of top concern – but it seems that Ivy’s hideous hats and eye-searing dresses do endear her to some, and I enjoyed the little side story of that love affair. In addition, Carriger puts serious thought into “floating dresses”, which, like walking gowns and riding outfits, serve a particular purpose – this one is riding on dirigibles. Recently, (and wonderfully so, that I might include it in the review) Ms. Carriger posted some sketches & thoughts on her blog concerning the floating dresses, and it’s one more little detail to love about these books. They are story, they are character development, but they are also a study in attention to detail.

I highly enjoyed this follow-up to Soulless. Alexia exists outside of her society in a way that allows her to be a strong female character, pursuing mystery and husband across the British Isles. Admittedly, to be purposely vague, I was shocked by the ending – I expected more from the man in question than his reaction. So it is with hopeful trepidation that I look forward to getting my hands on the newly released third book in the series, Blameless.