What’s this? Something not about Supernatural? I’ll give you all a moment to get over the shock.

Good? Okay. You may have heard about Adam Lambert in the past year or so, he was the runner up on season eight of American Idol (which, to be honest, I didn’t watch because I can’t stand the show) or you’ve heard a few of his singles on the radio (“For Your Entertainment”, “Whataya Want From Me” and the newest, “If I Had You”). You might also know Adam from the big to do that was made when he kissed his keyboardist/bassist and got into a little dirty dancing with his dancers at the AMAs. I have no shame in admitting that’s what made me really pay attention to him and I’m glad that I did, because he is an incredibly talented singer and not too bad to look at either. I’ve gotten very into the fandom (or bandom, if you prefer) and follow every concert on LiveJournal, as well as following Adam and his bandmates and dancers on Twitter. Back in June, my best friend (Sulwen) who introduced me to Adam’s music (as well as Supernatural) and I went to his concert in Toledo. It was a fun experience, albeit very hard to see and also incredibly hot. I’m very short, so general admission crowds aren’t my friends. Not too long after that, Sulwen text messaged me around 3AM with “Hey, do you want to see Adam in Covington?”. Naturally, I sent back “YES!” as soon as I read her message. Here is my experience from that concert which happened on August 30th in Covington, Kentucky.

Sulwen and I decided that for this concert, we were going to get to the venue as early as we could so we could get up close to the stage. We arrived at the Madison around 9 in the morning and were 41st and 42nd in line. Talking to other Glamberts, we found out that a couple people had gotten to the venue at noon the previous day just so they could get up front and camped out overnight. That is some impressive dedication! Most people brought folding chairs, food, music and other things to pass the time. I brought some rainbow cupcakes with edible glitter frosting for anyone who wanted them. Almost everyone had a sign with them or were making signs because we had gotten wind of a possible protest that day. The Westboro Baptist Church had planned a protest at Adam’s concert in Springfield, MO but never showed. A group of fans who weren’t going to the concert showed up to counter-protest the WBC and their rampant stupidity. We were all ready and waiting for some of these homophobes to show up. Here you can see my (blue) and Sulwen’s (purple) double-sided signs, as well as one of my cupcakes: 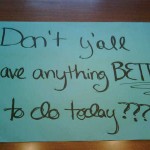 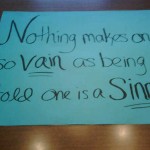 Some of the fans busted out the sidewalk chalk and glitter to glam up the sidewalks of Covington as well.

We were on a busy street in Covington, so a lot of people slowed down to gawk at this huge line of mostly women that stretched from the Madison down the street and around the corner (the venue was sold out and holds about 1200 people). A few actually stopped to ask why we were all sitting out there and a few others gave us disapproving looks. The protestors, much like their WBC counterparts, never showed! It was incredible to see how many people had brought signs just at the rumor of a protest. My favorite that I remember seeing said “God loves glitter”. Fandom is awesome like that sometimes.

The line started moving a little closer around 5 that afternoon, everyone who brought chairs or coolers took them back to their cars and we all were eagerly counting down the hours until they opened the doors. Once we got in the doors, we hurried inside to the theatre so we could get up as close to the stage as possible. Sulwen and I were only three people from the stage – mission accomplished! It took a while for everyone to get inside and then there was a bit of a delay for Adam’s opening act, fellow American Idol contestant, Allison Iraheta. Allison had definitely improved since we saw her in Toledo, her voice sounded great and she really got into her songs. I’m always surprised that she’s only 18 years old because her voice sounds much more mature than that. There was a problem with her earpiece that we noticed, though the sound was just fine for the audience. She performed songs from her self-titled, debut album which included an acoustic version of one of my favorites, “No One Else” that made me choke up a bit and did a fantastic cover of Pat Benatar’s “Heartbreaker”. The girl is just an adorable little ball of energy and really fits in well with the rest of the Glam Nation Tour.

Another brief pause while we waited for Adam’s band set up. I was highly amused by the fact that they played Big & Rich’s “Save a Horse, Ride a Cowboy” alongside Katy Perry’s “Peacock” and Shiny Toy Guns’ “Le Disko”. Actually, it sounded a lot like my own iPod had been plugged into their sound system. The concert opened with a remix version of Adam’s first single, “For Your Entertainment” and everyone (except for the husband in front of me who was obviously dragged there by his wife) sang along and danced. Adam came out in an outfit straight out of Velvet Goldmine and your eye was instantly drawn to him for the entire show. His opening medley consisted of “Voodoo”, “Down the Rabbit Hole” and “Ring of Fire” (which he had covered while on AI) and had some fantastic choreography. It felt very sexy and psychedelic, the three songs blended together flawlessly and were a fantastic starter for the fast-paced show. One of my favorite songs, “Fever” followed and there’s always a sexy bit of interaction between Adam and his bassist, Tommy Joe Ratliff (the one who he kissed at the AMAs) that ranges from full-on making out to a quick little lick to some playful touching and it’s always fun to see. We were treated to a little playful hip check before Adam joined his dancers down stage. From what I could tell, Adam was having sound problems with his earpiece like Allison had and this resulted in no kissing or licking during the song.

The dancers had a small interlude where they take over the stage while Adam did a quick costume change (a gorgeous long, black coat) for the next song, another favorite, “Sleepwalker”. The song is powerful and full of all that unrequited emotion after a breakup. It seems to be a favorite of Tommy’s as well because he almost always sings along and did so at this venue. Things slowed down a bit for the next couple of songs, acoustic versions of “Whataya Want From Me” and the uplifting “Aftermath”, with the emotional ballad, “Soaked” in between them. During these three songs, I could really see how much Adam appreciated the audience. He was visibly touched by the outcries of love and applause. The audience is a big part of how the show goes and Adam really feeds off the crowd’s energy. I’ve noticed in previous concerts when the audience wasn’t as into it as others were, there is a visible difference in Adam’s on stage behavior and the feel of the show. He wants you up and dancing and singing along. Our audience was definitely into it and having a good time. Though, I’m pretty sure that Sulwen and I were screaming our heads off enough to make up for at least ten other concert goers. More than a few times, I had some definite eye contact with Adam and that was pretty intense, let me tell you. I don’t think I’ve ever been to a concert were the performer did that and I really enjoyed it.

Things picked back up with “Sure Fire Winners” and “Strut” and continued through to “Music Again”. Adam took time out to introduce his fantastic band – Monte Pittman (guitar), Tommy (bass), Camila Grey (keyboard; also a member of Uh Huh Her with The L Word’s Leisha Hailey) and Logineu Parsons (drums), each one giving us a little taste of what they can do. Next were the dancer introductions – Sasha Mallory, Terrance D. Spencer, Taylor Green and Brooke Wendel (the tour’s choreographer), who showed off their stuff for everyone. Adam closed the show with his current single, “If I Had You” and made sure everyone was dancing along in the audience. However, that wasn’t quite the end! Adam returned to the stage for an encore – his cover of T. Rex’s “20th Century Boy”. There was an amusing little fight between Adam and Monte during the song and they kind’ve chased each other around the stage. Someone had also tossed a girl’s thong onto the stage, which Adam twirled around his finger before flinging it back into the audience, because – really? A girl’s thong? Regardless, this song is my favorite encore choice on the tour. Previously, Adam had been closing with either Gary Jules’ “Mad World” or Led Zeppelin’s “Whole Lotta Love” (both he performed on AI) or both. While I like both of those songs, “20th Century Boy” is just so much more fun and fits in better with the whole glam rock theme of the show.

I had such an amazing time and loved that I could spend my last day with my best friend like that, even if I got a parking ticket, sore feet and about two hours of sleep. If any of you get the chance to go to one of Adam’s concerts, I highly recommend it. He is so talented and you get totally carried away by the energy of the show. Check out the other concert vids on YouTube if you can’t go to an actual concert.

You can check out Adam Lambert – For Your Entertainment and Allison Iraheta – Just Like You on Amazon.