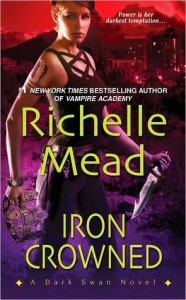 New York Times bestselling author Richelle Mead takes readers back to the Otherworld, an embattled realm mystically entwined with our world--and ruled by one woman's dangerous choice. . .Shaman-for-hire Eugenie Markham is the best at banishing entities trespassing in the mortal realm. But as the Thorn Land's queen, she's fast running out of ways to end the brutal war devastating her kingdom. Her only hope: the Iron Crown, a legendary object even the most powerful gentry fear. . .Who Eugenie can trust is the hardest part. Fairy king Dorian has his own agenda for aiding her search. And Kiyo, her shape-shifter ex-boyfriend, has every reason to betray her along the way. To control the Crown's ever-consuming powers, Eugenie will have to confront an unimaginable temptation--one that will put her soul and the fate of two worlds in mortal peril.

This is a tough review to write. I loved Iron Crowned, but… I want to rant about it. Rants generally don’t make good reviews, especially when the reviewer is ranting about how much she liked it. And if I rant, it’ll be spoilerrific, which I’m going to try to avoid.

Eugenie Markham seems to have an incredible talent for digging herself in deeper, and in the process, frustrating the crap out of me as a reader. I like Eugenie, I really do. I think she’s a very human character, and her mistakes add to that. She’s not perfect, she’s not a good leader, hell, she’s not even very good at running her own life. I think the thing that frustrates me the most is that Eugenie doesn’t seem to be doing much to actually take control of her life and improve upon the very essential things that she’s not good at. Like, I dunno, running her kingdom. Or making decisions that aren’t based on what one or the other of the men in her life think she should do.

Kiyo… oh, Kiyo. I do not like Kiyo at all. I kind of liked him in the first book, Storm Born, but his controlling nature really turned me off. Add in his reaction to Eugenie’s rape in Storm Queen, and my meh feelings toward him turned to extreme dislike. So I groaned when he showed back up in Iron Crowned, and when I realized that his relationship with Eugenie was going in a romantic direction, I ranted at my poor, bewildered fiancé. I do like Dorian, though I know full well that he’s a manipulative, power-hungry guy. He’s just more open about it, and I have more respect for that than I do the sugar-coated bullshit that Kiyo lays on. I certainly don’t trust Dorian, but I like him more.

However, both guys are alarmingly controlling, and Eugenie seems oblivious to this. She lets each of them jerk her leash in turn, blindly believing that they have what’s best for her in mind, then gasping in horror when they inevitably screw her over. ARGH.

I have to admit, too, that her “quest” to get the Iron Crown was kind of laughable. It was way too short and way too easy. I expected so much more in this incredibly difficult quest, and it was a let down.

Reading this review so far, you might think that I didn’t like the book. I did, really, even though it stressed me the hell out. I still think the world is fascinating and the overarching story is pretty cool. I just want Eugenie to grow as a character, to get stronger through all of these crappy experiences, and at the end of Iron Crowned, I felt like she took a couple of steps back instead of moving forward. I’m still hooked on the series, but I’m ready for this badass shaman/fairy queen to stiffen her spine and start taking charge.

Review: Trailer Park Fae by Lilith Saintcrow
Review: The Circus of the Damned by Cornelia Grey