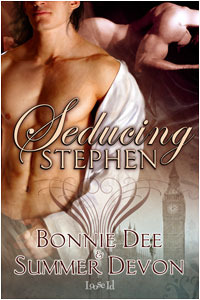 What does a jaded earl see in a studious young man? Everything he never knew he was missing.

The dark, alluring Peter, Lord Northrup, is Stephen’s every nighttime fantasy made flesh and he’s in Stephen’s bed, ready for passion. When Peter discovers the bedroom mix-up, he’s ready to leave, until Stephen begs him to teach him all the things he’s only imagined.

The two men, visitors at a country house, begin a delirious, passionate affair with Northrup as teacher and Stephen his eager student. Peter knows their liaison is about hot sessions of sexual exploration, not love--and backs away when he sees shy Stephen’s heart is involved. Passion and commitment can’t coexist for men like them.

But Peter is haunted by memories of the summer fling and the quiet young man he spurned. He may have taught Stephen too well the lessons of a cynical roué.

I liked this book much better than The Gentleman and the Rogue. The story wasn’t necessarily better, in fact it suffers from the same problems as the other: not enough depth and lack of character development. But I liked the characters in this book more. And, thankfully, there was no use of the word “bunghole” or any other bizarre euphemism anywhere in the narrative. That fact alone automatically gained this book points in its favor.

There’s really not much to the plot, you have your Jaded Rake… who’s name escapes me at the moment – and you have your Virginal Youth, Stephen, who happens to the be the Stephen from the title of the book. So, taking that little bit into account you already have the basic premise of the book. Well, the first couple chapters anyway, because Stephen turns the tables around and becomes the seducer not much later. (And after a quick Goodreads search, I’ve discovered the Jaded Rake’s name is Peter. Honestly, his name doesn’t even matter, because they call him by his title, Lord Northrup, more often than not anyway.)

So, the book starts off with Lord Northrup drunkenly wandering into the bed of his friends, son’s best friend’s bed in the middle of the night because he showed up for an illicit sex party a month too early. He thinks Stephen is a present to him from the lady of the house and tries to initiate sexy times. Like ya do. Stephen just kind of goes with it, because he’s never had a sexual encounter of any kind before (he’s between 18-22 years old I think and in college) and he’s super into dudes,  so he doesn’t want to miss out on possibly his only chance of ever having sex with a man. Things happen, sex ensues, and Northrup figures out that Stephen is not only a virgin, but not there to be his boy toy for the night. He tries to leave, but Stephen doesn’t want him to, so Northrup promises that he’ll give him lessons in all things sexual before Stephen goes back to college. They have a few more sexy rendezvous after that, but it abruptly comes to an end when Northrup decides to leave. He’s realized he’s enjoying having sex and spending time with the younger man and apparently that’s a big no-no.

After a year apart, some embarrassingly clingy letters from Stephen, and meaningless sex between Northrup and other men, Northrup still can’t get Stephen out of his mind and is no longer satisfied with his sex life. He wants more. He wants a relationship and he wants it with Stephen. Unfortunately, his little “lessons” with Stephen the previous year kind of created a monster, because the next time they meet, Stephen is no longer the virginal innocent youth. Oh, no, he’s had several anonymous sex partners by now and decides to seduce Northrup. It works. And that’s basically the last 3/4 of the book.

This book really isn’t that deep. The lust turns to love so quickly once Northrup and Stephen are reunited. Granted, they had a year to stew and subconsciously pine for one another, so maybe the lust to love can be excused. There is no Big Bad in this story, so there’s no real looming threat for the two men. There is a small hurdle by way of Stephen’s father getting sick and Stephen having to come and take over the architecture business, but the solution to that problem was so easy and was realized so quickly, that I don’t understand why it was made to seem like the be all end all situation that it clearly was not. There was so much that could’ve been expounded upon. Like the worker who was clearly flirting with Stephen towards the end of the book. That would’ve been a good opportunity for small drama and another bump on the way to Happily Ever After, but Stephen doesn’t even flirt with the idea of being with him. He even says to himself that he wouldn’t even consider it because he’s technically that guy’s boss. Smart, yes, but it doesn’t make for an interesting story.

Really, I feel like this story is only good for the smut and for the fact that even though the characters don’t have much background or development, they’re more interesting than the characters in the previous book I read by these authors. I will probably read this again.

Review: The Gentleman and the Rogue by Bonnie Dee & Summer Devon
Review: Noble Metals by L.A.Witt
Review: The Circus of the Damned by Cornelia Grey

Review: Catch a Tiger by the Tail by Charlie Cochet
TDF Link Roundup 3.17.15