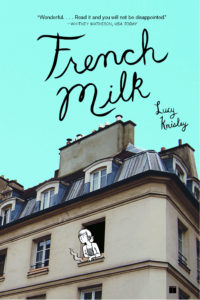 Through delightful drawings, photographs, and musings, twenty-three-year-old Lucy Knisley documents a six-week trip she and her mother took to Paris when each was facing a milestone birthday. With a quirky flat in the fifth arrondissement as their home base, they set out to explore all the city has to offer, watching fireworks over the Eiffel Tower on New Year's Eve, visiting Oscar Wilde's grave, loafing at cafés, and, of course, drinking delicious French milk. What results is not only a sweet and savory journey through the City of Light but a moving, personal look at a mother-daughter relationship.

I’ve been following Lucy Knisley on Instagram for a while, but for some reason I hadn’t gotten around to picking up one of her books until now. I decided to start with French Milk, as it’s her first book and it’s a travel memoir about Paris. I love Paris, guys. I haven’t been in at least sixteen years, but I love the memories I have of the city, and I’d love to go back one day.

Honestly, I think my love of Paris made me like this book more than I would have otherwise. As a memoir, it doesn’t have a very linear sort of narrative thread. French Milk is literally a travel diary with liberal doses of food. Knisley fills the pages with her charming drawings of the places they went and the food they ate, peppered with notes about their days in Paris as well as her own thoughts and feelings. I did find it a delightful read, and thanks to the book, I’ve made a list of places to go (and eat) in Paris. But if you’re coming into French Milk expecting some sort of personal revelation made as Knisley explores Paris with her mother, it’s really not that kind of memoir.

I think if you’re already a fan of Knisley’s work and/or you’re a big fan of Paris, you’ll like this book. It’s nice to read along and reminisce about my own Paris memories, and I found it a very comforting read.

Review: I Am Pusheen the Cat by Claire Belton

Review: A Wrinkle in Time: the Graphic Novel