It’s almost here. It’s a week away, in fact, so here I am with TDF’s yearly Get Yourself Ready for SDCC post! This year, I’m going to focus on taking care of yourself and having a good time at Comic Con. 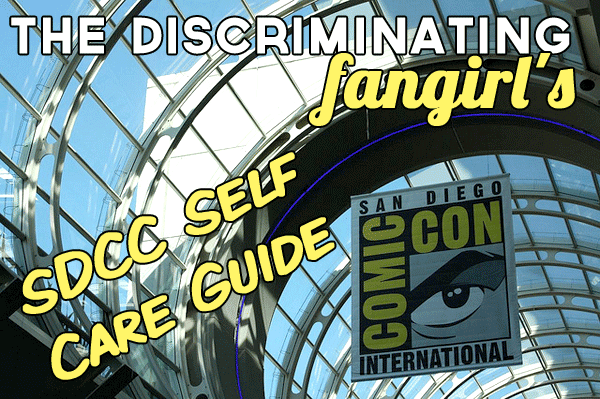 Chat with people in line. If youâ€™re anything like me (so introverted that youâ€™re bordering on being a hermit), being in big crowds is uncomfortable. I tend to clam up when Iâ€™m stuck in line, and thatâ€™s something I try to work on every year. Just remember: all those people youâ€™re in line with? They like that same thing you like; otherwise they wouldnâ€™t be in that line with you. So be open to chatting with your line neighbors!

REST. Itâ€™s tempting to go full-tilt all four and a half days because thereâ€™s so much to see and do, and you donâ€™t want to miss any of it. But if you donâ€™t rest and eat properly, youâ€™re going to be miserable by Saturday morning. If you need a quiet place to sit and relax, head up to the Mezzanine level. You can find quiet halls up there where you can get some rest. You can also head out onto the steps in the back of the Convention Center to get some sun and fresh air (but if youâ€™re ghostly like me, remember your sunscreen!).

Drink water and eat food! If you can, bring your own sandwiches and snacks. The food sold at the convention center is expensive and not terribly good for you. There are lots of restaurants in the Gaslamp and within walking distance, but sometimes you just want to park your ass on the floor and eat something between sessions, so if you can bring food, do it. Also, bring your own water bottle. You can refill it for free at the water fountains, and you donâ€™t have to pay upwards of $3 for a bottle from the snack bars.

And one last word of advice about convention etiquette:Â ask cosplayers before snapping photos if theyâ€™re not already posing for other photographers. Even then, make sure itâ€™s okay if you take a photo. NEVER take photos of cosplayers when theyâ€™re eating or resting or in the bathroom, for godâ€™s sake, were you raised in a barn? If a cosplayer declines to pose for a photo, donâ€™t pester her, follow her, or take a photo anyway, because that makes you an asshole. Last year I watched a guy follow a Catwoman cosplayer around, bugging her even though she had repeatedly said she didn’t want to pose for a photo. Don’t be that guy.

Okay? Okay! So, who all is going to SDCC this year? I’ll be there all four days as well as preview night, so say hi if you see me!