It’s no real shock here that the ladies of TDF love Idris Elba.

I’m not sure you are, sir. (Source: Unknown)

He first came to our attention as Heimdall in the first Thor film back in 2011. This talented and gorgeous man has been in movies and TV shows both in the UK and in the States. He also made an appearance in the French film,Â Belle maman, where he played Catherine Deneuve’s boyfriend (and if anyone knows where I can get a copy, let me know ASAP). Outside of his acting career, Idris is also a singer and DJ who has worked with Lucy Liu and appeared in the Mumford & Sons’ video for “Lover of the Light.” Some of you may remember him best as Stringer Bell in The Wire, and I highly recommend this love scene from the show if you’d like a little taste (probably NSFW). 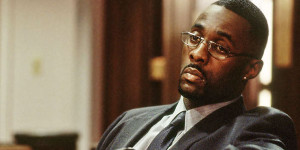 As a long-time AbFab fan, I was pleasantly surprised to find out that he played a small role in “Sex” as Hilton, a young male prostitute hired to join in Eddie and Patsy’s sex party.

After a bit of a mishap with some stay-hard spray (Source: idris-elba.net)

Of course, Thor wasn’t the only comic book adaptation that Idris has been a part of. He played Moreau in the Ghost Rider sequel and was a total Loser in 2010 as Roque. 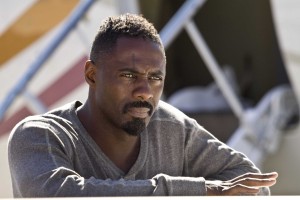 Prometheus may not have been great, but Idris’ role as the namesake ship’s captain, Janek, made it worth watching.

Why didn’t we get a sex scene between these two? (Source: Collider)

Watching him as the lead in the brilliant BBC series, Luther really made me a big fan of his. I cannot recommend that show enough. Rumor has it, there may be another installment in the works. For fans who want more in the meantime – check out the prequel novel, Luther: The Calling, that details the case we see at the opening of the series.

Idris’ part as Marshal Stacker Pentecost in 2013’s Pacific Rim may just tie with John Luther for my favorite role. Not only did he play the stoic leader of the PPDC who cancels the apocalypse, but also a loving father looking out for Mako. Completely swoon-worthy.

Even if it is purely speculation at this point, he certainly has our vote to be the next Bond. Sexy, smooth, can kick serious ass, and is British. What more do you need for Bond than that?

And I couldn’t finish a post about Idris Elba without mentioning my – ahem – appreciation for his perfect backside (very NSFW).