The X-Files is back! For this six-part mini series, I will be recapping and reviewing each episode. These will contain spoilers, fair warning.

While investigating the gruesome murder of a city official, Scully receives devastating news about her mother (Sheila Larken). The event dredges up old feelings about her son’s adoption and the ensuing guilt she suffered.

I’m going to start by saying that the monster of the week aspect of this episode was somewhat terrifying (mostly horrifically violent) and could have been more interesting, but was completely overshadowed by Scully’s personal storyline. It rehashes the tulpa idea (last seen in “Arcadia,” one of my favorites), though Mulder claims that the creature was a misinterpretation of the original Tibetan texts. A being created to enact revenge against those who take advantage of the homeless population, but one who can seemingly disappear into thin air at will. And then the story just kind of trails off, feeling weirdly unfinished and without any kind of arc, just a lot of bloodshed.

Early on in the episode, Scully gets a phone call from her brother, Bill Jr., that their mother has had a heart attack and is in the hospital. He is living overseas in Germany with his family (for those of you who remember, Bill Jr. is in the service) but was contacted by the EMTs who took their mother to the hospital. She leaves to be by her mother’s side, where she spends most of the episode while Mulder takes over the investigation. What I really loved is that Mulder does what he can to follow some leads, but quickly gets himself to the hospital to be there for Scully. The episode flashes back to when the situation was reversed, and he held vigil at Scully’s bedside while she laid in a coma (“One Breath”). 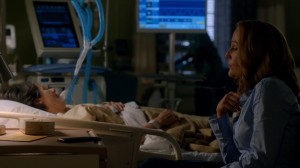 Needless to say, the episode and how it unfolds is utterly heartbreaking. I was in tears the second Scully got the phone call from her brother (I may have read some spoilers and insinuated some things from the promos), and goddammit, Gillian is an amazing actress. We already know this, particularly if you’ve watched The Fall or Hannibal, but this episode really lets her stretch her legs and explore the emotional depth of her character. There’s a helplessness that I really identified with, as well as Scully’s need to throw herself into her work to make herself feel in control again.

The episode also gives us insight to how Mulder and Scully lean on each other all these years later. They may no longer be romantically involved (I have my own theories about this, but that’s for another time), but they share this incredible bond that recalls a scene from season seven (“The Sixth Extinction II: Amor Fati”):

Mulder: Scully, I was like you once. I didn’t know who to trust. Then I… I chose another path… another life, another fate, where I found my sister. The end of my world was unrecognizable and upside down. There was one thing that remained the same. You were my friend, and you told me the truth. Even when the world was falling apart, you were my constant. My touchstone.

Scully: And you are mine. 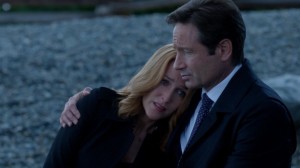 As far as the William subplot within the episode, and what we have seen so far, I have a feeling that we aren’t really going to get any big answers this time around. We only have two more episodes left for this mini-series, and currently, no order for another one. There is a chance they will reveal more, and some interviews have stated that we see more in the season finale, but I also know this show. They’re never going to lay everything out for us in a neat package, and if they are going to try to do another mini-series or another movie, they will want to leave it somewhat open-ended.

What did you all think of the episode?

Images courtesy of Fox and The X Files Source.

The X-Files Revival Recap: 10×3, “Mulder and Scully Meet the Were-Monster”