San Diego Comic Con is less than a week away, and holy crap, am I just now making a post about it? Yikes! In my defense, I’ve been on like, three vacations this summer with various family and friends, and I need a vacation from all of these vacations. 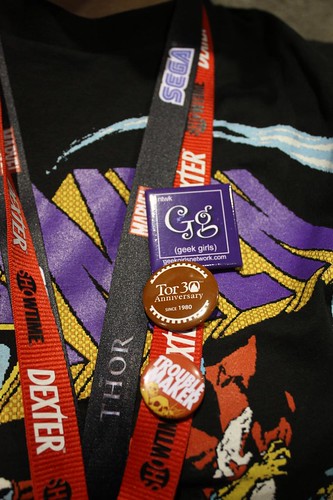 But the last group of vacationers is leaving tomorrow, and on Monday, my guy and I are driving from Oregon to San Diego for the comic con to end all comic cons. This will be my third year going to SDCC, so I thought I’d share my list of essential things to bring and to keep in mind. I hope these will help you out, whether you’re a Comic Con vet or a newbie going for the first time!

Be prepared to stand in line. You can chat up your fellow geeks! This is advice for myself, too, because I’m pretty shy and get nervous when talking to new people. So I’m going to try to talk to people this year. This is my plea for you to talk to me, too. ;)

And more advice for myself: try not to get grumpy. This is my big problem at cons since I don’t like crowds. I know. But the potential for geeky awesomeness outweighs my hatred of giant groups of people crammed into small spaces. Just remember that everyone else is fighting the same crowd as you and keep your zen-like calm.

HAVE FUN. That’s what this con is for, after all. If you get a chance, check out San Diego, too, and try to go to some parties after the con is over. I’ll be at the Geek Girls Network’s 2nd Annual SDCC Geek-Out and the League of Extraordinary Ladies’ party, as well, and I’m going to try to make it to Action Chick’s Blazin’ Hot Party, too. If you’re going to the con or any of these parties, say hi to me!